Leipzig, the club affiliated with soft-drinks giant Red Bull, will be joining the Bundesliga next season. The team that traditionalists love to hate beat Karlsruhe 2-0, capping an inexorable march to the top. 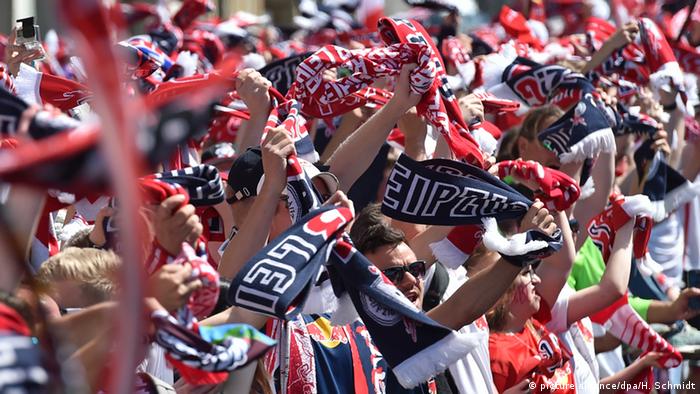 RasenBallsport Leipzig have played better games this season, but the result and not how it was achieved was the main thing in the eastern Germans' home match against Karlsruhe.

The Red Bulls dominated possession in the first half but lacked the incisiveness needed to break the ice. Then, in minute 52, midfielder Stefan Ilsanker picked out Emil Forsberg. The Swedish striker put Leipzig in front with his eighth season goal.

Thereafter it was a matter of holding the result against an overmatched Karlsruhe side, which had trouble creating any pressure whatsoever on goal.

And four minutes from time, Marcel Halstenberg put the match beyond any doubt - with some help from Karlsruhe keeper René Vollath. Vollath let Halstenberg's free kick slip through his hands, causing pandemonium in Red Bull Arena.

Leipzig ended the day on 67 points, five more than third-placed Nuremberg with only one round of play left. In a somewhat comical footnote, Leipzig coach Ralf Rangnick slightly injured himself running away from the customary shower of beer.

"The coach doesn't seem to be in very good shape," Leipzig forward Davie Selke joked. "He should have prepared better. But we're not letting him off the hook. He did a great job."

The 2-0 win completed a seven-year run that saw the team, which was only founded in 2009, move from the fifth division all the way up to the top flight. Freiburg already secured promotion the previous round.

Meanwhile, Nuremberg have wrapped up third place in the second division and will play the third-from-bottom team from the first division in the end-of-season playoff. Possible opponents include Bremen, Frankfurt and Stuttgart.

Bayern's record title run has left the Bundesliga with a boredom problem. The one bit of consolation for fans of tight championship races, says DW's Jefferson Chase, is that in sports nothing lasts forever. (07.05.2016)

RB Leipzig have secured the services of Ingolstadt's Ralph Hasenhüttl, paying a German record fee for a coach. He will be replaced by outgoing Karlsruhe coach Markus Kauczinski. (06.05.2016)