Slovenia could be the next eurozone member needing a bailout after a downgrade by the US ratings agency Moody's. The move has forced Slovenia to abandon a bond auction it hoped would raise 2.2 billion euros ($3 billion). 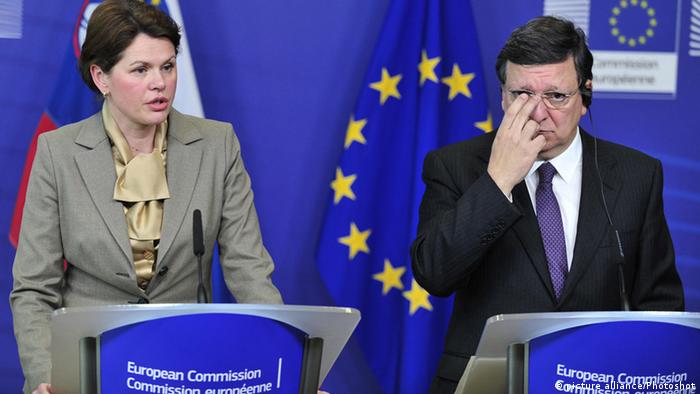 Moody's assessment prompted Slovenia's Finance Ministry on Tuesday to rescind a bond auction which had been intended to raise a much-needed 2.2 billion euros ($3 billion) in funding.

The US ratings agency warned that Slovenia could soon become the next eurozone member to seek a bailout. Slovenia joined the European Union in 2004 and adopted the euro currency in 2007.

"Slovenia's vulnerability to external shocks, like those brought about by the crisis in Cyprus, could make it difficult for the sovereign to fund itself at sustainable rates", Moody's said.

Cyprus' parliament has voted in favor of a bailout from international lenders whose agreement terms have upset worried Cypriots. As part of the deal, depositors must help recapitalize their own banks. (30.04.2013)

Lawmakers in Greece have approved an emergency bill with a range of provisions opening up payment of international aid. Opponents organized a protest in advance of the vote. (29.04.2013)

This "increases the likelihood that authorities would need to request an external assistance programme," it added.

Slovenia's six-week-old government of centre-left Prime Minister Alenka Bratusek (pictured above with European Commission chief Jose Manuel Barroso) plans to present a reform programme for dealing with the banking crisis and fixing the nation's public finances in Brussels by May 9.

A draft proposal published last week showed the government estimates that Slovenia's three largest state-owned banks will need at least 900 million euros in the first half of this year.

Banks as a result became reluctant to lend any more cash and the economy stumbled.

It contracted by 2.3 percent in 2012 and Slovenia's central bank has warned that gross domestic product will shrink by a further 1.9 percent this year.

The European Commission predicts that Slovenia's public deficit will be 5.1 percent of GDP in 2013, far above the eurozone limit of three percent.