Protests have been banned in the Indian capital New Delhi amid violent weekend demonstrations over the gang rape of a young woman last week. However, a journalist covering protests in Manipur was fatally shot by police. 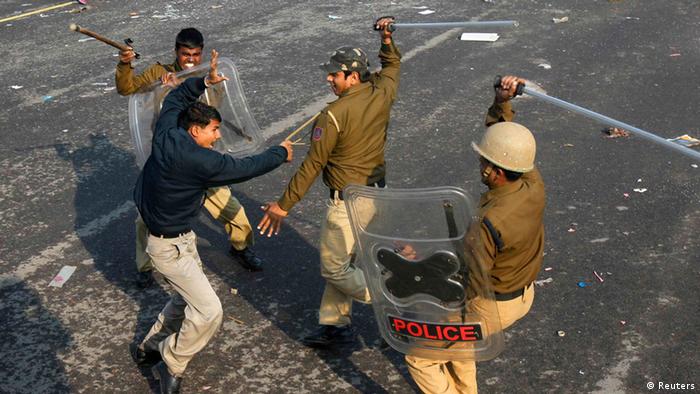 Angry demonstrations have continued for a second day in the Indian capital New Delhi, with police struggling to control protesters who have rallied since Saturday at the India Gate monument.

The police used batons as well as tear gas and water cannon to hold them back. A journalist, covering related protests in the city of Manipur, was shot dead after police fired shots to disperse an angry crowd.

The protesters were trying to advance on the presidential palace but were stopped on both days. On Sunday, it was announced that protests in the capital have been banned, with police cordoning off all routes leading to landmark government buildings.

According to local police, crowds around the India Gate monument had swelled to more than 2,000 on Sunday, with some demanding the death penalty for the six accused.

"We are here to protest a heinous crime. We have the right to protest," said a protester quoted by the Press Trust of India.

It's alleged the six men picked up the 23-year-old woman and her male companion, gang-raped her and then threw the pair from a moving bus that had been driving around the capital.

The woman is in a critical condition in hospital with severe intestinal injuries from being beaten with an iron rod.

According to police figures, sex crimes in New Delhi are common, with a rape reported every 18 hours on average, though most sexual assaults go unreported.

But the brutality of the December 16 attack has sparked calls for capital punishment for rapists, and more steps from the government to ensure safety for women.

India's Home Minister Sushilkumar Shinde has promised to consider the demands for death penalties to be imposed in the case.

Indian rights groups have sharply criticized political leaders for blaming Haryana rape victims themselves for their plight, calling the comments 'insensitive' and synonymous with adding insult to injury. (22.10.2012)