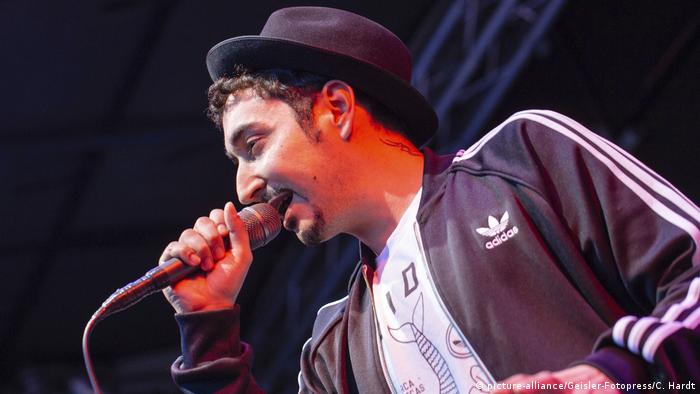 Two men sit on either side of a table in an empty warehouse. One man is wearing a bomber jacket, his head is shaved on both sides. He is "biodeutsch" – "organic German" – and he's proud of the fact that he votes AfD (the right-wing anti-immigrant party Alternativ für Deutschland). He leans forward and speaks up: "They're trying to take away my people's roots."

On the other side of the table is the object of the first man's hatred: a man with an "immigrant background," in this case Turkish. His darker skin, full beard and leather jacket mark him out, despite his fluent German. The "non-believer" and the "backward Turk" lock horns.

This is the music video for the new track, "Aber" ("But"), from German rapper Eko Fresh. It was inspired by US rapper Joyner Lucas's 2017 hit, "I'm Not Racist."

In Lucas's video a white man wearing a "Make America Great Again" cap sits opposite a black man wearing an oversized sports shirt and conspicuous gold watch. The former says: "Talkin' bout slavery like you was around back then," to which the latter retorts: "Even if I wasn't picking cotton physically, that don't mean I'm not affected by the history."

Both songs revolve around a refrain we've all heard before: "I'm not racist, but…" which is usually followed by an opinion that belies at best ignorance and at worst a deep-seated prejudice or even racially fueled hatred.

Since appearing on YouTube a week ago, "Aber" has been viewed nearly 1.5 million times.

"I am German when we win"

The debate surrounding immigration and nationalism was revived in Europe during the so-called migrant crisis of 2015 and 2016, and has remained in the spotlight as nationalist and populist parties have exploited the issue to build support across the Continent.

In Germany, the debate heated up again this week after Mesut Özil quit the German national football team. The midfielder, who has Turkish parents but was born and grew up in Germany, cited racism and "double standards" in German society as his reason for withdrawing.

"I am German when we win, but I am an immigrant when we lose," Özil wrote in a statement. 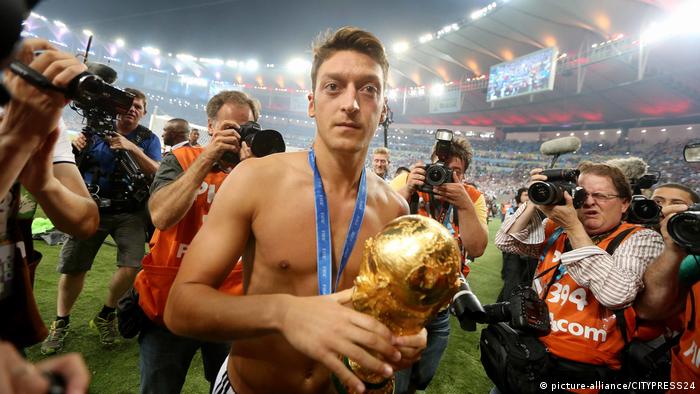 Mesut Özil was part of the winning German team at the 2014 World Cup in Brazil.

In May this year, Özil and teammate Ilkay Gündogan were photographed meeting Turkish President Recep Tayyip Erdogan and presenting him with football shirts. Given the widespread criticism of the Erdogan regime in Germany, the photo sparked a fierce debate about national identity and loyalties.

Özil gets a specific mention in Eko Fresh's song – "You'll let Özil be the scapegoat, but wait, what's the message here? No World Cup for him because he shared a selfie?"

But the there's another side to the coin: "You enjoy democracy in my land, but back home you help a despot come to power," says the proud German in the video.

Around half a million people of Turkish heritage who live in Germany voted in the Turkish elections in June this year, which saw Erdogan voted back into power. The results showed that support for Erdogan was proportionally higher among this diaspora community than it was among voters in Turkey.

#MeTwo – a voice for mixed heritage

"Aber," which was produced by another popular German rapper, Samy Deluxe, doesn't just allow each of the characters' prejudices to stand unchallenged. Eko Fresh raps the entire track, but in the video he appears for the first time in the third section, where he plays himself — a person with a mixed German-Turkish background who sees no reason why he should have to choose between the two countries.

"Believe me, guys, there are thousands of us. We grew up between two worlds," he tells the other two men. "I don't have to decide, I just have to be myself."

In recent days the hashtag "#MeTwo" has been doing the rounds online. A play on the #MeToo hashtag, which has been the social media voice of victims of sexual harassment or assault, #MeTwo is being used to talk about the racism and ignorance experienced by people with a mixed cultural heritage, mostly in Germany.

The hashtag was started by author and activist Ali Can, who grew up in Germany after moving here from Turkey with his Kurdish parents.

Can told DW: "This isn't just about Özil. This is about every German who has migration in their background. Similarly to what he said, we are seen as German when we're successful, but as soon as we make a mistake we're migrants."

Eko Fresh's song tackles a difficult topic head on, highlighting both the understandable resentments and the irrational prejudices on both sides of the divide. But the lasting impression is undeniably positive. Eko Fresh leaves the other two men looking somewhat sheepish as he concludes:

"The way I see it, bro, whether it's religion or tradition, living together in one country is difficult — but you can do it."

The Özil affair: A chronology in quotations

The photos that Germany players Mesut Özil and Ilkay Gündogan had taken with Turkish President Recep Tayyip Erdogan set off a heated debate, culminating with Özil quitting the national team. Here's who said what, when: (23.07.2018)

Three globally known musicians address music, migration and integration. Three-time Grammy winter Angelique Kidjo was born in Benin; Y'akoto has her roots in Ghana but grew up in Hamburg; and Nneka is German-Nigerian.