Qatari foreign minister on FIFA 2022: Qatar was 'transparent from day one'

How serious is Qatar about human rights? Does the country turn a blind eye on private fundraising for terrorism? What about the strategy in Syria? This week on Conflict Zone is Qatari Foreign Minister Khalid Al Attiyah.

How serious is Qatar about human rights?

The controversies over the 2022 World Cup in Qatar have been going ever since the Gulf state was awarded the bid in 2010. Allegations include rigging the original vote and human rights violations in the building of stadiums.

Qatar's Foreign Minister Khalid Al Attiyah defended the country during his appearance on Deutsche Welle, saying the country puts "human rights first" and was "transparent from day one."

"Some people from your region cannot digest that a small country like Qatar, an Islamic country, in the Middle East, can host the 2022 cup," he said.

This, even as Amnesty Internationalreports that Qatar "failed workers." And the country has been slow to make substantial reforms to improve conditions in hotels and on building sites.

Most pressing, however, are the bribery allegations that could see withdrawal of the 2018 and 2022 World Cups awarded to Russia and Qatar. But Al Attiyah was not swayed by the ongoing corruption scandal at FIFA.

"Nothing can scare us in Qatar," he said, "because we have presented the best file for the 2022." 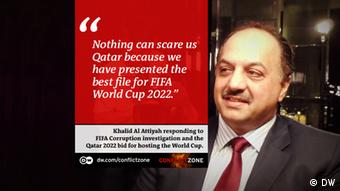 Before he became a politician, Al Attiyah worked as a fighter pilot with Qatar's airforce, founded a law firm and served as the President of the National Committee for Human Rights at the same time. After being Minister for Business and Trade, he was appointed Minister of Foreign Affairs in Prime Minister Abdullah bin Nasser Al Thani’s cabinet in 2013.

'A lack of strategy' in Syria

Qatar has played a major role in the Syrian crisis by helping rebels battling to overthrow Assad. With Russians now in Syria to support Assad, Sebastian asked Al Attiyah if the strategy of supporting rebels has failed.

"Maybe we have a lack of strategy," Al Attiyah said, "but not a failed position because our position is firm: we supported the Syrian people."

The level of support from Qatar for rebels has been estimated to be in the billions of dollars. A Financial Times investigation from 2013 reported that Qatar had "seized control of the Syrian revolution", and earned a role in Syria that seemed "uncharacteristically prominent for a country that lacks the diplomatic experience and traditional heavyweight status of a more discreet Saudi Arabia." Through the end of 2012, the paper estimated the worth of arms contributed to Syrian rebel forces at between $1 and $3 billion.

"Some of us lack the trust the people of Syria can rule and can have the Syria which they want," Al Attiyah said, "the Democratic Syria."

It's not just Syria. Qatar has also come under scrutiny for affiliations with extremist groups. Sebastian confronted Al Attiyah with some of the allegations around funding for terrorism coming out of Qatar, like the US Under-Secretary for Terrorism and Financial Intelligence, David Cohen, who said in April of last year that private fundraising for terrorism in Qatar went unchallenged.

"I know you have your own views on who is a terrorist and who isn't, but the use or threat of violence, often indiscriminate, in support of political or other aims is a reasonable starting definition and this is what Hamas does, doesn't it?" Sebastian asked, continuing. "But you continue to call them a 'resistance movement focused on liberation'. Why?"

"Because they are," Al Attiyah responded. "They never came out of Palestine seeking, you know, seeking to do wrongdoing outside Palestine."

"They do plenty of wrongdoing in Palestine," said Sebastian.

"They are legitimate," Al Attiyah said. "They came through ballot. If you disagree with me then, okay, we can discuss this. They've been elected by their people."

To see the whole interview, check out Conflict Zone on October 21.

Qatari Foreign Minister: "ISIL is only a symptom"

Rights organization Amnesty International has accused Qatar of promising little and delivering less in terms of labor reforms ahead of the 2022 World Cup. More than a million migrants are working in construction. (21.05.2015)

In May, Qatar police arrested film crews from the BBC and ARD for filming the living conditions of workers building stadiums for the 2022 Football World Cup. For DW, Reese Erlich was able to get in and out undetected. (19.06.2015)

A British newspaper has alleged that a former FIFA executive committee member paid millions to gain support for Qatar's bid to host the 2022 World Cup. The report comes less than two weeks before the World Cup in Brazil. (01.06.2014)

Blatter: 'Of course a mistake' to award Qatar 2022 World Cup

FIFA President Sepp Blatter has said that it was "of course a mistake" to pick Qatar for the World Cup, citing the hot climate in particular. Yet sunshine is not the only shadow hanging over Qatar's nomination. (16.05.2014)

How serious is Qatar about human rights?

Teaser: LGBTQ fans are concerned for their safety at Qatar 2022 but visitors may be treated less harshly than residents, in a country where homosexuality is illegal. Activists criticize FIFA, the lack of reform and the media coverage focusing on visitors.

The draw for the group stage of the World Cup is a reminder that Qatar 2022 is just months away. But, despite years of international pressure, the human rights situation in the emirate remains cause for concern.