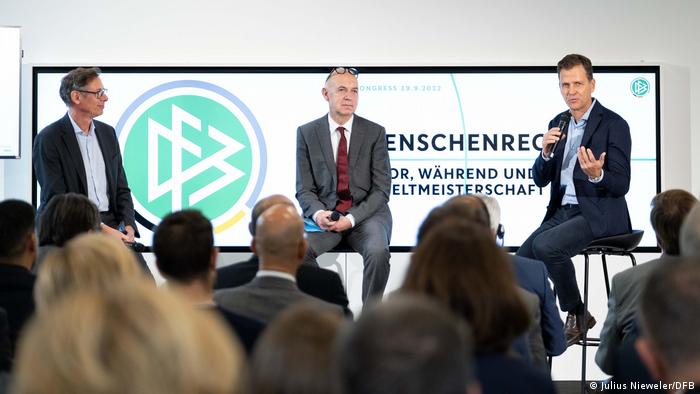 The German Football Association, the DFB, has to find the right balance between addressing human rights and focusing on success on the pitch

"I'm a man, and I love men. This is normal. So please get used to it or stay out of football. Because the most important rule in football is: football is for everyone.

"So abolish the death penalty — abolish all the penalties regarding sexual and gender identity."

A brave statement and impassioned plea made by fan representative Dario Minden in the midst of a two-hour long "Sport and Human Rights" congress hosted by the German Football Association (DFB) and aimed at "intesifying the discussion."

The criticism leveled at organizers and world governing body FIFA certainly was intense. Minden's words were aimed at Abdulla Bin Mohammed bin Saud Al-Thani,Qatar's ambassador to Germany, who was in attendance at the congress held just 62 days before the 2022 FIFA World Cup gets underway.

The ambassador acknowledged that the rights situation is "not perfect yet — it's not at 100%, it's a journey." But he was not able to brush aside the disapproval as prominent representatives from politics, trade unions, independent organizations and fan groups used unflattering terms on stage.

The managing director of Reporters Without Borders, Christian Mihr, described Qatar as an "absolute, autocratic monarchy" that wants to "conceal" the situation regarding freedom of the press and freedom of opinion through its investments in sport, the media and internet surveillance.

FIFA President Gianni Infantino was referred to as the "chief cynic" of a "mafia bunch" by Minden, second chair of Unsere Kurve, an interest group representing active football supporters. Of all the speakers, Minden minced his words the least as he called for the DFB to be part of a "progressive alliance" so that German football fans could "look forward to football festivals" again in the future. 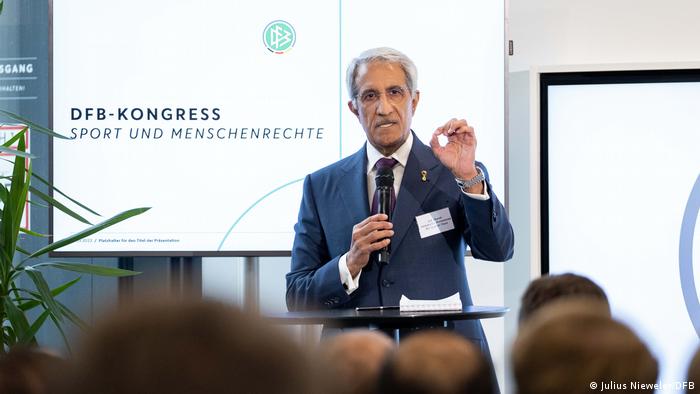 Bin Saud Al-Thani wanted the congress to focus more on the "enjoyment of football."

The sentiments shared are the reason the German national team is facing a difficult "balancing act," according to national teams director Oliver Bierhoff.

"We have to be careful when finding this balancing act between the responsibility and awareness that we have as human beings," Bierhoff said.

"On the other hand, we're traveling as the German national team, we're representing our country, we want to play football successfully," he added. "We're looking forward to a World Cup, to measuring ourselves against the best in the world and excited to represent Germany."

Bierhoff's sentiments were shared by the president of the Norwegian Football Federation, Lise Klaveness. At the FIFA Congress in Doha in March, she said that World Cups were awarded in "unacceptable ways with unacceptable consequences" in 2010.

"Human rights, equality and democracy — the core interests of football — were not in the starting XI," Klaveness said. "These basic rights were pressured onto the field as substitutes, mainly by outside voices. FIFA has addressed these issues, but there is still a long way to go."

Six months later, speaking as at the DFB Campus, Klaveness admitted that football associations are on a "steep learning curve" and "still exploring" where their responsibilities lie. 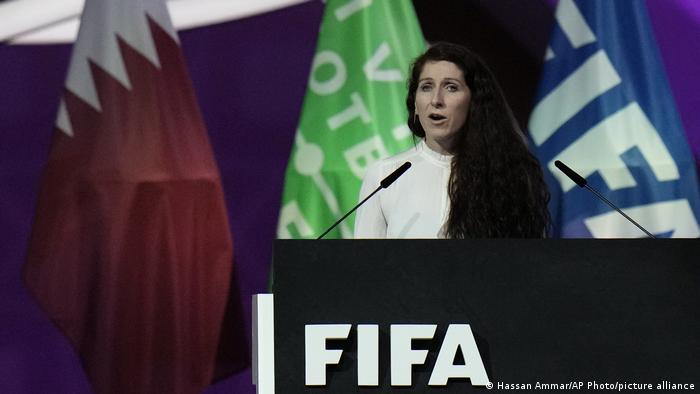 "We have to admit and realize that what football associations did before on human rights was not good enough," the former Norwegian international said.

"It's not a Qatar question," she added. "It's a FIFA, UEFA, Norwegian Football Federation, DFB question — but it should be a balancing of responsibility.

"From the FIFA, the federation's perspective, the most important thing is that we lean in now. That we’re now present in the game of human rights, so we learn, so that when we go into the next stage after the World Cup in a better stage."

"When it comes to FIFA, Qatar and this arrangement, I think it's very important to get a compensation fund because we're obligated to do it as it states in Article 6," Klaveness said, citing the FIFA Human Rights policy. "It's how we move from policy to impact."

With her closing remarks, Klaveness also addressed the issue of LGBTQ+ rights in the Gulf state and called for "better guarantees" during and after the World Cup — guarantees that people are "not more in danger because of the World Cup and because the tension the World Cup brings to the country."

Her words were echoed by Minden, of Unsere Kurve. He opened by talking of fans' "shame" when it comes to how easily their beloved sport can be bought, Qatar's "bloody exploitation" of migrant workers and the fact that human rights "are once again being used as bargaining chips."

"I'm a man, and I love men," Minden said. "I do, please don't be shocked, have sex with other men. This is normal. So please get used to it or stay out of football. Because the most important rule in football is: football is for everyone.

"So abolish the death penalty — abolish all the penalties regarding sexual and gender identity. The rule that football is for everyone is so important. We can't allow you to break it no matter how rich you are. You're more than welcome to join the international football community and to host a big tournament. But in sports it is how it is: You have to accept the rules."

And as several speakers at the congress on the DFB campus stated, the rules when it comes to human rights "cannot be compromised."

Opinion: World Cup 2022 - No anticipation, only chaos, ahead of Qatar

The count-down is on to November's World Cup in Qatar. But criticism over the host nation's human-rights record continues. There are still questions over the treatment of migrant workers and LGBTQ rights.