As Russians elect a new parliament on Sunday, Dec. 2, DW-WORLD.DE takes a look at several possible outcomes to a vote that has been criticized as step in Putin's path back to power. 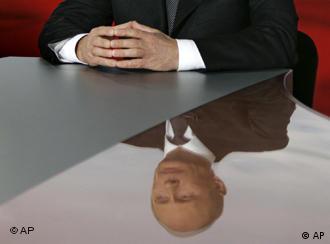 What is he planning to do?

According to a recent survey, about two thirds of the Russian population doesn't expect Sunday's parliamentary elections to be run fairly.

The country's constitution stipulates that a president may only serve two consecutive terms, which would exclude President Vladmir Putin from staying on for a third term when his current one is up next year -- a fact the Kremlin elite doesn't seem to want to accept.

For the government leaders, most of whom come from the KGB, Putin serves as a guarantee of their own status and, most importantly, their access to Russia's economic resources.

The "2008 Problem" has been on the table for years: What to do to keep Putin on after spring 2008 as Russia's most powerful man and thus maintain the existing order and distribution of power?

Speculation and outcome theories abound; the following three are the most popular.

Scenario one: from president to prime minister 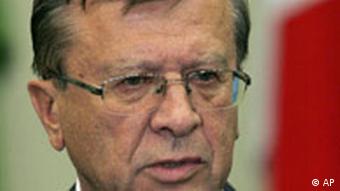 According to two scenarios, Prime Minister Zubkov could become president

The prime minister scenario is based on the fact that Putin is running in the parliamentary elections as the top candidate of the United Russia party, which has the strong support of the Kremlin, and hasn't excluded the possibility of becoming prime minister -- either directly following the elections or in spring 2008 at the latest.

According to Russia's current constitution, the office of prime minister has only limited authority. Should Putin take on the position, it is expected that some of the presidential powers would be shifted to his new office. One of Putin's confidantes, like Sergei Ivanov, Viktor Zubkov or Boris Gryzlov, would likely be named president.

Since the election of the prime minister occurs through a majority vote in the Duma, Russia's parliament, the scenario could be touted both domestically and internationally as a boost for parliamentarianism.

A second scenario stems from ambiguity in the constitution: Following the elections in the Duma, Putin could step down as president and become a parliamentarian. Russia's current Prime Minister Viktor Zubkov would then become the country's third president since the fall of communism, after Boris Yeltsin and Vladimir Putin. In this case, it would be possible -- even if the constitutionality is hotly disputed -- for Putin to run in the March 2008 presidential elections and once again claim Russia's highest political chair.

A variation on this scenario suggests that Zubkov could be elected in March but resign a year later due to health reasons. This would open the door once again for Putin to reclaim the presidency. 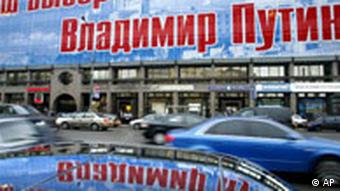 According to a third scenario, Putin would relinquish the presidency in 2008, but informally maintain power by being glorified as the country's "national leader." A new, supposedly spontaneous "For Putin" movement has recently been campaigning in this direction. The movement is, in fact, supported by the Kremlin-supported United Russia party.

A win in Sunday's elections by United Russia with Putin as its top candidate would, according to this scenario, give him the moral right after his term expires to pressure his successor into maintaining his political course.

The third scenario doesn't rule out the possibility of Putin returning to the presidency following an "acceptable" break.

Following the social, economic and political upheaval of the 1990s, the Russian population sees Putin as a guarantor of political stability, which is in turn associated with economic growth and international influence.

For this reason, the majority doesn't expect fair elections, but still puts up with every strategic maneuver of the political elite to keep Putin in power. It is this apolitical stance, solidified by the Kremlin's harsh treatment of its critics, that make all three of these scenarios not just theories but real possibilities.

Putin Accuses US of Meddling in National Elections

Russian President Vladimir Putin has accused the US of urging international observers not to monitor parliamentary elections to be held on Sunday, Dec. 2. But election monitors say Russia's visa office is to blame. (26.11.2007)

The Russians love their president. They admire his iron rule, and the way he goes fishing topless. But is it the real Putin they know? (24.11.2007)

As European election observers were kept from entering Russia and gave up their mission, hundreds of Russians have demonstrated for President Putin to stay on for a third term, even though the constitution forbids it. (16.11.2007)

Which scenario do you find most plausible? Please include your name and country in your reply.