Putin Supporters Call for an Unconstitutional Third Term | Europe | News and current affairs from around the continent | DW | 16.11.2007

As European election observers were kept from entering Russia and gave up their mission, hundreds of Russians have demonstrated for President Putin to stay on for a third term, even though the constitution forbids it. 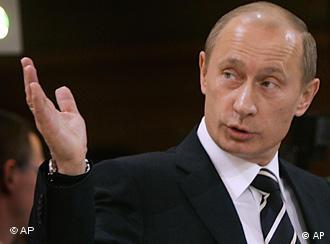 The movement's name, Pro-Putin, says it all. The group, which was founded in the provincial town of Twer this week, claims to have collected 30 million signatures in support of President Vladimir Putin serving a third term, although the constitution prohibits it.

"We see an opportunity for Vladimir Putin to stay on as head of state," said Pawel Astachow, one of the movement's 600 founding members.

And his group is not alone. Ever since Putin put himself forward as the leading candidate of the United Russia party for December's parliamentary elections, the country has seen the emergence of dozens of groups supporting his bid to remain in power.

Although under the Russian constitution Putin cannot run for a third term as president, there is nothing to stop him standing for the office of Prime Minister. 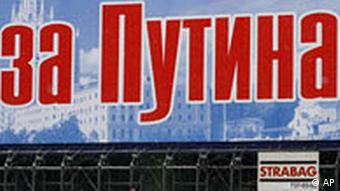 Plenty of Russians are "For Putin," just as this massive poster reads

Falk Bomsdorf, head of the Moscow office of Germany's liberal Friedrich Naumann Foundation, said the actual election campaigns have been completely overshadowed by the pro-Putin demonstrations.

"We can no longer talk in terms of a parliamentary election," he said. "There are no parties putting forward their agendas, no political debates and no alternatives."

Thus far there has been no mention of a United Russia party program, but that, say critics, is because Putin is the program. As the president said earlier this week, a clear win on Dec. 2 would give him the "moral right" to determine the path of Russian politics even after his term runs out in 2008.

"If the people vote for United Russia, it means a clear majority of the people put their trust in me," Putin said.

He added that such a display of support would give him the moral right to hold those in the Duma and the cabinet responsible for the implementation of the tasks that have already been set. Putin did not explain how he would maintain his grip on power, but said there were "various possibilities." 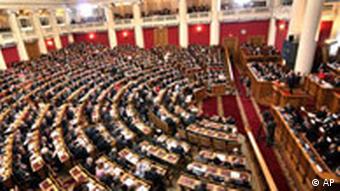 The OSCE sent 400 observers to the last Duma election

The way the election is shaping out, it is set to become a referendum for the president, Bomsdorf said.

"The Kremlin is doing everything it can to prevent proper elections," he said. "In my opinion, that is illegal."

On Friday, Europe's main elections watchdog, the OSCE, announced it was calling off its observer mission for the December ballot, on the grounds that Moscow has been uncooperative.

In a statement, the Organization for Security and Cooperation in Europe said that the Russian authorities remained unwilling to receive observers in a timely and cooperative manner and cooperate fully with them.

The Russian Foreign Ministry said the OSCE had "invented references to alleged difficulties in obtaining Russian visas" in order to cancel its mission. The European organization, which was originally invited on Oct. 31 to send just 70 observers to watch the election -- 330 less than for the Russian Duma election, applied for the visas on Nov. 2, according to German press reports.

"It is abundantly clear that the Russian election commission does not want any witnesses for their brilliant electoral preparations," Alexander Konovalov, head of the Institute for Strategic Studies told the Russian Nowyje Iswestija newspaper.

No real alternatives to Untied Russia 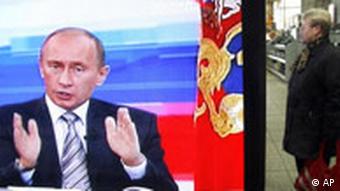 Putin remains popular among large parts of the population

Moscow has shrugged off criticism that the upcoming vote is being stage-managed to ensure a landslide victory for the ruling United Russia party, and meanwhile the well-oiled wheels of Putin's promotional apparatus continue to turn. Television advertisements talk about "Russia's economic well-being" and "Putin's plan," and the president's supporters march the streets in the name of promoting Putin.

Thomas Kunze, who until recently ran a branch of Germany's Konrad-Adenauer Foundation in Moscow, said the Russian public genuinely thinks Putin is doing a good job.

"The middle class has experienced an improved standard of living under Putin, and the economic moguls value the stability which Putin has brought to Russia," he said.

Were he allowed to run for a third term as president, Putin would currently be in line for between 60 percent and 70 percent of the vote. With that in mind, the pro-Putin campaigns seem unnecessary, but Bomsdorf said their aim is not to advertise for Putin but to inspire the apathetic Russian public to the ballot box.

"Russians don't bother with elections, and why should they if there aren't any real alternatives," he said.

Opinion: An Attack on Basic Democratic Rights in Russia

Russian journalist Anna Politkovskaya was shot one year ago. The failure to solve her murder shows that the country is still far from being a democracy with an independent judiciary, says DW's Cornelia Rabitz. (07.10.2007)

Russia and the European Union discussed cooperating on human rights, drug enforcement and cultural exchanges at a summit that however acheived little on key sticking points. (26.10.2007)

Should Putin find a way to serve a third term as president? Please include your name and country of residence in your reply.