Thousands of pro-Europe demonstrators have taken to the streets for the ninth time in cities across Germany and Europe. A minute's silence was also held for the victims of the Stockholm and St. Petersburg attacks. 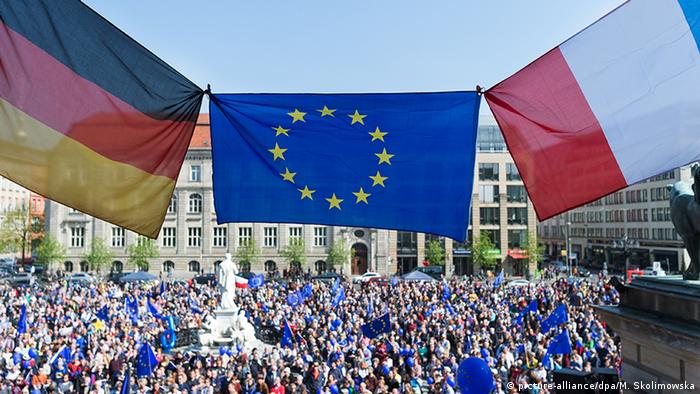 In Berlin on Sunday several thousand people once again turned out to peacefully demonstrate in support of a united Europe. The ninth "Pulse of Europe" rally in the German capital took place on the city's historic Gendarmenmarkt. Police failed to give any specific number of participants.

With just two weeks to go until French voters head to the polls in their presidential election, this week's rally was held under the motto "France!"

'Europeans do it better - together'

Before beginning the usual lively proceedings, however, this week's demonstrators first held a minute's silence in remembrance of the total of 17 victims killed in the Stockholm and St. Petersburg attacks earlier this week.

Inside Europe: Taking the Pulse of Europe

Inside Europe: Taking the Pulse of Europe

Among the speakers at Sunday's rally was Leibniz prize-winner and art historian Benedicte Savoy. On the sidelines of the event participants were able to design their own protest posters emblazoned with slogans such as: "Europeans do it better - together."

Berlin wasn't the only city participating in Sunday's Pulse of Europe rally, however. Since the conception of the grassroots movement late in 2016, some 92 cities in a total of twelve countries are taking part in the weekly initiative. The most popular are German cities.

With the EU facing a host of obstacles in the coming months - including Brexit negotiations, as well as the growing popularity of right-wing populist and nationalist parties - "Pulse of Europe" aims to "encourage citizens of the European Union to speak out publicly in favor of a pan-European identity."

Conceding that Germans might have remained comfortable and politically inactive for too long, co-founder Daniel Röder previously told DW in Frankfurt that he sees the movement as a wake-up call.

"If the idea of Europe isn't held up by its citizens, then it won't work," Röder said.