The island of Puerto Rico also went to the polls on Nov. 6 and the outcome of the referendum on statehood or status quo could have a crucial bearing on the next US presidential election. 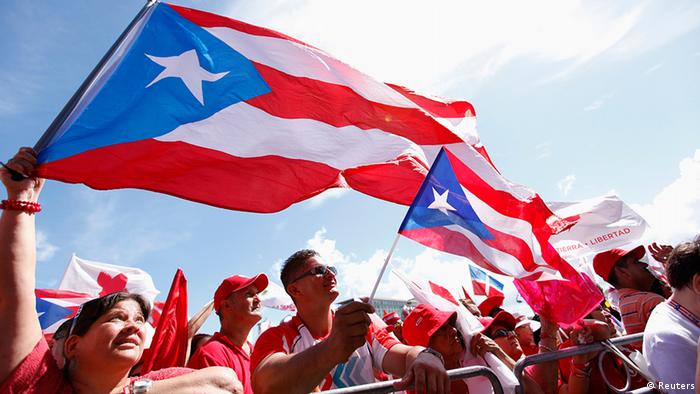 Puerto Rico is confusing, a place with a strong identity but one that even Boricuas, as Puerto Ricans call themselves, would find hard to define.

From the moment you touchdown in Puerto Rico its dual heritage is clear, the cabin crew welcomes you to the capital San Juan in English and then Spanish.

Its people are US citizens, they've bled and died for the US flag but still don't have the right to vote in presidential elections. A country that's proud of its Olympians and cheers when a local girl takes to the stage in the Miss Universe competition is not a country in its own right.

85 percent of the population admit to speaking very little English, indeed it's so unlike anywhere in the US yet a growing number want it to become a full part of it.

The island is a territory of the United States so on Nov. 6, Puerto Ricans voted for the next governor and who'll represent them in the US congress and also if they want to change their relationship with America.

The first part of the referendum will be a simple yes or no. Do people want to keep the current status as a territory?

They'll then be given a choice of what alternative they'd prefer: to become the 51st State of America, be independent or a Freely Associated State. This will be the fourth time in 45 years that the Puerto Ricans have voted on the issue and it continues to be a highly divisive topic.

In a bar in San Juan, the last of the presidential election debates is underway, the Spanish voiceover of Mitt Romney is drowned out by my question on the future direction of the island.

"We should be independent," says one of the waiters as he joins the conversation while placing my plate of tapas. Another customer adds that people won't change a thing, as "people are dependent on things staying the way they are."

In the past, the Popular Democratic Party (PPD), which wants to keep the status quo, has been grateful to see the vote for statehood fail but in many respects many feel Puerto Rico is at a crossroads. The island is a self-governing territory of the United States so its foreign policy and defence and most importantly much of the money Puerto Ricans depend on are federal funds provided by the US. A budget deficit is now a common in Puerto Rico; it's been that way since 2004/5 - in 2011 Puerto Rico's debt amounted to $68 billion.

Luis Fortuño, the Republican Governor of Puerto Rico who is up for re-election, won in 2008 by a wide margin in a "voto de castigo" a punishment vote against the Popular Party who had been in power at the start of the long and painful recession. In an effort to bring down the deficit, the government has slashed thousands of public sector jobs. It's the largest employer and accounts for some 25 percent of the total workforce. Unemployment now stands at 13.6 percent and the poverty rate is 45 percent.

Manufacturing has traditionally been a cornerstone of the economy but over the past 20 years the sector has declined by half as tax breaks to US based firms ended.

The opposition say the referendum may be a calculated attempt to get more of the governor's supporters to the polls in what is likely to be a tight election. Traditionally voter turnout in Puerto Rico is one of the highest in the world.

On the outskirts of San Juan, the headquarters of the Puerto Rican Independence Party (PIP) is decked out in their color, green, and the platform is covered in campaign posters for their candidate Juan Dalmau. The party is not the political force it used to be. It had a lot of support in the 1930's but is now a minority party with no chance of winning the vote but insists there's no other alternative.

"The fact is that Puerto Rico is an accident of history," says Fernando Martín, executive president of the PIP. "The US would want the official language of universal understanding to be English, they'd not want it to be a burden to the national treasury and it would have to be substantial unanimity, more than 50 percent. With those three criteria it'll be almost impossible for Puerto Rico to achieve it in 60 or 70 years!"

Meanwhile in the US, Republican contender Mitt Romney has said that'd he'd push for statehood if he became president. He's banking on central Florida, a key battleground in the US elections which has a high number of Puerto Rican voters. So is this a calculated move by Governor Fortuño and Mitt Romney? 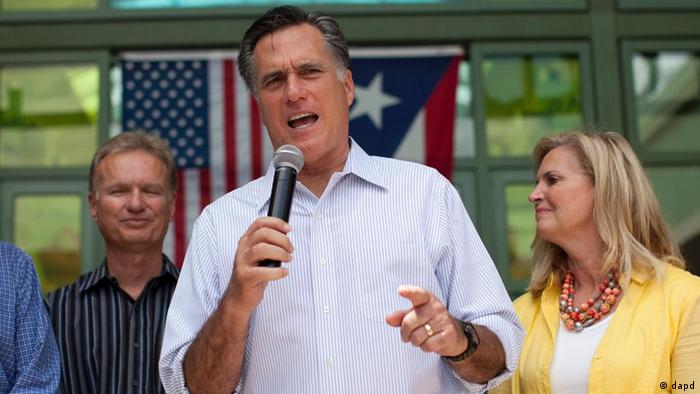 Mitt Romney says he would support statehood for Puerto Rico if elected president.

"The answer is yes to both, they've been friends for many years and if it helps him in Florida, good for him," says Marcos Rodriguez Ema, Fortuno's chief of staff.

Puerto Rico has a population of 4 million but just over half that number live in the US.

"We're still waiting for daddy United States to tell us what to do," says Julio Verela, a US-based Puerto Rican American blogger and social commentator. "We have to make this binding, at the moment you could get 52 percent of Puerto Ricans saying we don't want the current system we want an alternative and the US Congress could just say, that's not enough."

The United States is the second-largest Spanish speaking country in the world but is it ready to accept a Hispanic country as a state?

"The statehood movement in Puerto Rico isn't a liberal one, it's Republican and in the US - that has often supported anti-latino discourse - it will also be applied to Puerto Rico," says Professor Maritza Stanchich from the University of Puerto Rico.

The business community doesn't openly back statehood but privately many see the financial benefits of being a full part of the US. "It's not ideological but purely financial, being a part of the US would make economic sense," says Steve Armbruster a former stockbroker and business owner.

Guaynabo City is a prime example of the issues the country faces; it's an upper income suburb - an "experiment in English" with few road signs in Spanish and high end cars parked at the San Patricio Plaza, as one person described it - where many are in favor of statehood.

Head in the other direction and the complexion of Puerto Ricans becomes noticeably darker with more Afro-Puerto Ricans and Dominican migrants. Many of them want the same thing but a vote for statehood won't mean an automatic change.

On the streets people are geared up to vote. "It won't make any difference, we'll have even less rights. Look how the US government treats California, and they've got lots more money than us. Things should stay as they are," says one man.

"I believe the country should become a 51st State because the US has influenced our country completely and we are Americanized completely 100 percent, there's no differentiation," says a young woman.

This time many are hoping for a decisive answer to Puerto Rico's big question, but since the final decision will be taken in Washington will it really matter?

"It's the first round of a long fight," says Fernando Martín, "to show them that this can't go on forever."

US presidential hopeful Mitt Romney looks set to increase his advantage over his Republican rivals with a win in the country’s fifth most populous state. (21.03.2012)

On November 6, California will vote whether genetically modified food should be labeled - a long-standing practice in Europe. The move has drawn fierce opposition from US corporate interests - and two German firms. (16.10.2012)