PSG vs Red Star Belgrade under investigation for match-fixing

PSG's 6-1 victory over Red Star Belgrade is under investigation for match-fixing, according to French newspaper L'Equipe. It is claimed bets amounting to almost €5 million were placed on a five-goal winning margin. 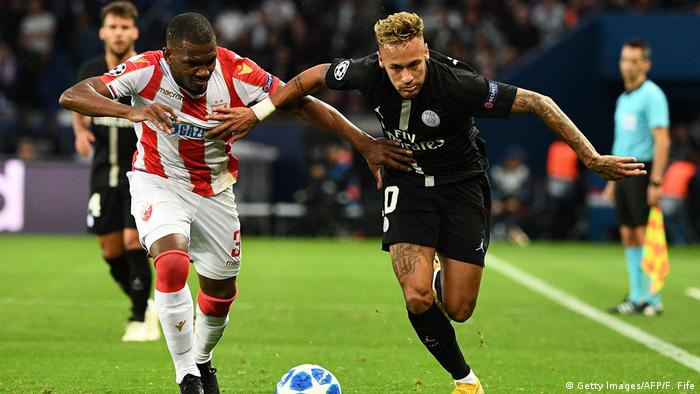 An investigation into suspicions of match-fixing in a Champions League match between Paris St Germain and Serbian club Red Star Belgrade is underway, according to the French financial prosecutor's office.

French sports newspaper L'Equipe published an article on its website on Friday claiming that European football's governing body UEFA had alerted French authorities to possible match-fixing in the October 3 fixture, based on a tip from a "credible" informant.

L'Equipe said the informant had told UEFA before the match that a high-level Red Star official was planning to place nearly €5 million in bets on a five-goal winning margin for PSG, with the complicity of several players. This prompted the investigation, with Paris St Germain winning the game 6-1.

The prosecutor's office said it could neither confirm nor deny L'Equipe's story and both clubs denied any involvement with the allegations made in the newspaper report.

"With the utmost anger and disdain, Red Star vehemently denies allegations that the club's Champions League match with Paris Saint Germain might have been rigged. Red Star also strongly denies the involvement of any of the club's officials in any such illegitimate acts," Red Star said in a statement.

"Allegations from L'Equipe could cause considerable damage to our club's reputation and Red Star Football Club therefore insists that UEFA as well as the authorities in Serbia and France should fully investigate these suspicions to find out the truth," Red Star said.

PSG, owned by the state-backed Qatari Sports Investments, also denied any wrongdoing and said it would cooperate with investigators.

"The club categorically rejects any direct or indirect involvement with these suspicions," PSG said in a statement, adding that it had not been contacted by investigators.

L'Equipe wrote that no evidence of any match-fixing had yet been uncovered by authorities and that all options were possible, from match-fixing to false allegations.