French authorities informed the president of Paris Saint-Germain soccer club, Nasser Al-Khelaifi, that he is under formal investigation for corruption in the bidding process for the World Athletics Championships. 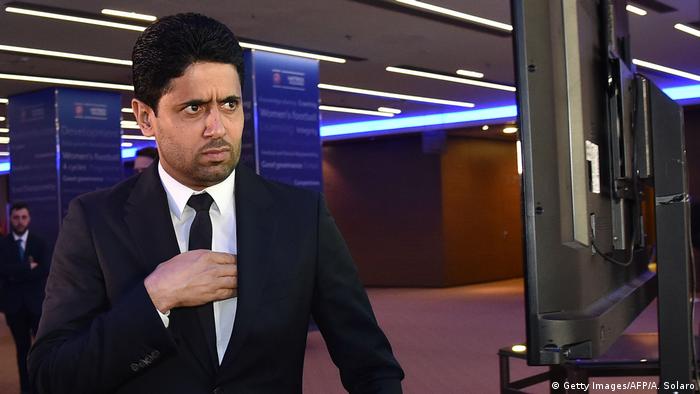 The preliminary charge of "active corruption" was filed against al-Khelaifi, who is also chairman of the beIN media group in his native Qatar, in mid-May. Under the French legal system, the process of being "mis en examen" does not automatically trigger a trial, but al-Khelaifi is strongly suspected of corruption pertaining to the bidding process for this year's World Athletics Championships, also known as the "worlds."

The chief executive of beIN, Yousef al-Obaidly, was also handed preliminary charges. The former president of the track and field world governing body IAAF, Lamine Diack, is suspected of "passive corruption" in the same case.

The case centers around two payments totaling about $3.5 million (€3.1 million) that were allegedly made a few days before the decisive vote in 2011 to Pamodzi Sports Marketing, which belonged to Diack's son, by another sports marketing company, Oryx Qatar Sports Investment, which belongs to al-Khelaifi and his brother.

However, al-Khelaifi's lawyer, Francis Szpiner, told the AFP news agency that his client "was neither a shareholder nor an executive at Oryx in 2011," adding that he did not authorize any payments relating to the allegations. "He didn't intervene, directly or indirectly, in Doha's bid [for the World Athletics Championships]," Szpiner said.

Doha lost out to London to stage the 2017 World Athletics Championships but it won against Barcelona and Eugene, US, to host this year's event.

World football's governing body was hoping to expand the competition to include 48 countries. However, that would have needed another Gulf country to host games along with Qatar, amid deteriorating ties in the region. (22.05.2019)

PSG chairman Nasser Al-Khelaifi has been elected to key post at UEFA – with the support of the German FA. This comes despite widespread concerns about the influential Qatari's role at PSG and TV company BeIN Sports. (07.02.2019)

According to internal documents revealed by "Football Leaks," PSG's scouting department illegally gathered data on potential recruits' ethnicity. The club acknowledges this but denies a culture of racial profiling. (23.01.2019)

The treatment of migrants has been a disgrace but there are other reasons why Qatar should still host the World Cup, writes DW's Mark Meadows. The best way to honor the workers is to play in the stadiums they built.

PSG's signing of Lionel Messi sent shockwaves around the world and sparked euphoria among fans, but it's also added fuel to the burning issue of financial controls in European football, and where the game goes from here.