Protests strengthening in Bulgaria | Europe | News and current affairs from around the continent | DW | 26.07.2013

Thousands of protesters gather daily at the parliament building in Sofia. Bulgarians angry over corruption are demanding that the government resign - and the movement is gaining momentum. 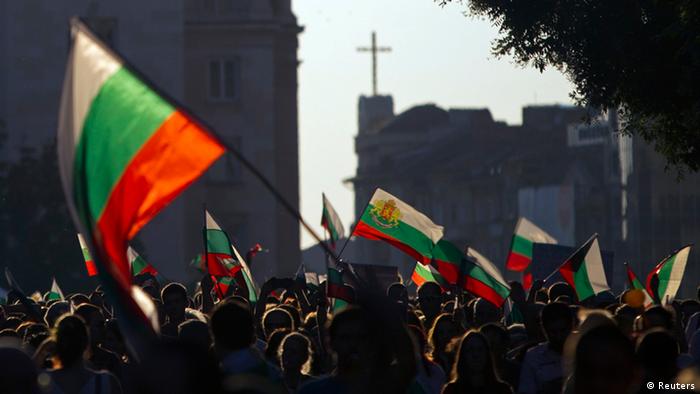 "Bulgaria is a victim of mafia government" reads the sign in the hands of a tall, white-haired, middle-aged man. Pravdolub Ivanov comes to protest in front of the government building in Sofia with a new slogan every night. His messages are witty and topical, so people are often snapping photos of him with their cameras and smartphones. When protesters were accused of being paid, he wrote on his white poster: "I am not paid. I hate you for free."

"Protesting takes me a few hours daily and I have to reorganize my time, my work suffers, my family too. I have two small kids and all that goes to my wife," explained Pravdolub, who's been participating in the anti-government protests in Bulgaria that have been going on for nearly a month and a half now.

Thousands of people gather at the parliament building every night to demand resignation of Plamen Oresharski's government, which is backed by the former communist party BSP, the party of the Muslim minority known as DPS, and the nationalistic and anti-European "Attack" party.

"I have to be here because we need to tear our country free of the hands of the mafia," added Ivanov, who works as a painter when he is not protesting. The protest movement began on June 14 this summer when parliament approved the controversial appointment of 33-year-old media tycoon, magistrate, businessman and politician Delyan Peevski as head of the powerful national security agency. A week later, Peevski's appointment was annulled under pressure - but the protests went on, becoming stronger. 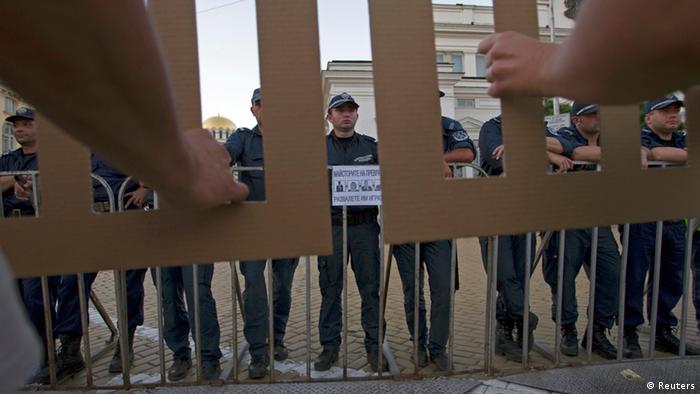 Bulgarian citizens have been the next to rise up against their government, after recent movements in Turkey and Brazil

Tihomira Metodieva, a young accountant and a hobby photographer, said the government "went too far with the appointment of dirty people. It is not normal for criminals to rule the country," she said.

Metodieva comes every night for the rally, and some hours later comes to "drink coffee" in front of the parliament, as the protesters call their morning demonstration. "When I have to exchange some documents with my clients or sign bank papers, I ask them to come here," Metodieva said. Unlike Ivanov, she has found a way to combine work and protest.

"Mafia" is the word you hear and read most often from the protesters. No party signs or party leaders are visible, only the national flag. A recent survey by the Open Society Institute in Sofia indicated that a record-high 72 percent of Bulgarians see the situation in the country as "unbearable," while almost two-thirds support the protests. The insurgence has no leaders or political party, but is gaining popular support regardless.

Politicians are being accused of serving the mafia, and putting all public resources into the hands of oligarchs and monopolies.

Ognian Yanakiev, a mechanic who has come to protest together with his partner Angelina and their 13-month-old son Yassen, explained the problem from a personal perspective. "I am trying to open a small business, and for the last three months I've been fighting with the monopoly electricity supplier. It's been a dead-end," Yanakiev said. "I want to work, not waste my time on bureaucracy. Something has to change!" he almost shouted.

People at the square provide different answers to the question, "What's next?" But they are perfectly clear about what they want now: "I want them to resign, nothing more. We all demand resignation," answered Metodieva. 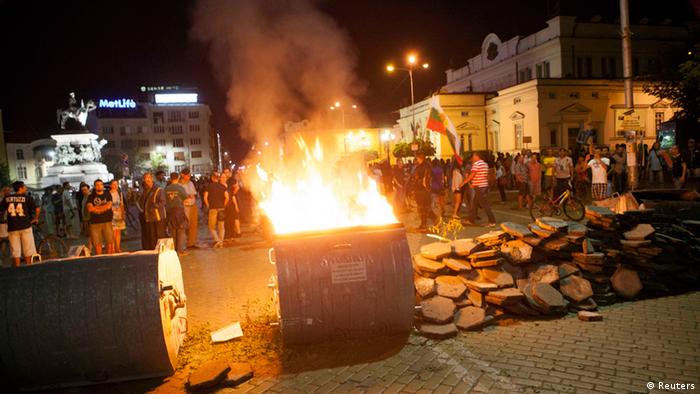 On Wednesday (24.07.13), protesters blockaded exit of more than 100 people from parliament for about eight hours

Victor Dimchev is a 35-year-old television producer and member of a Facebook group whose name plays off the abbreviation for the Bulgarian security agency. "I came here because I see the government leading Bulgaria to ruin," he said. The group supports organization of the protests, coordinates events and monitors for provocations.

On Wednesday (24.07.13) night, the crowd was unable to isolate a small group who started dislodging cobblestones from the street. The police declared the protests no longer peaceful, and a number of people were beaten as security forces tried to evacuate parliamentarians and ministers from the besieged national assembly building.

"I was there, I saw women beaten, I saw people bleeding, I saw flying stones and unimpressed policemen just watching the provocateurs," recalled Victor Dimchev. "I saw angry policemen, but I saw crying policemen too - crying while beating protesters," he added. On the following day, twice as many protesters showed up, and the crowd was more enthusiastic than ever.

Dimiter Dimitrov, a professor of political science at the University of Sofia, said the government is in an endgame. "It's impossible for parliamentary sessions to always end before sunset, and for the parliamentarians to be evacuated by bus every night. It's surreal," he pointed out.

Now, 42 days into the protests, "the fatigue is enormous, I sleep for only three hours a day. But I am not giving up, they have to give up," Metodieva said.

As the sun goes down on the 42nd night of unrest in Sofia, Dimchev shakes the hands of newcomers, almost one every minute. It turns out that those people are his guests: "I asked all my friends to come to the square, and this is the best present I could dream of: I am turning 35 today."

Bulgarian cultural expert Alexander Kiossev took part in the demonstrations in Sofia. Talking to DW, he explains what it is that joins the protesters together and what the violent escalation will mean for the country. (25.07.2013)

Opinion: Violence in Bulgaria to be expected

Demonstrators in Bulgaria want to take down the system, but aren't proposing an alternative. That's contributing to the rise in violence within the country, writes DW's Alexander Andreev. (25.07.2013)

Bulgarians have taken to the streets of Sofia to vent their anger over several appointments the government has made that they see as dubious and only serving the interests of oligarchs. (26.06.2013)

Bulgaria: Patience is running out

Wave of protest in Bulgaria