Protests erupt in Haiti ahead of President Moise's funeral

Supporters of President Jovenel Moise set up roadblocks in Haiti demanding justice as the nation prepares to bury the murdered leader. 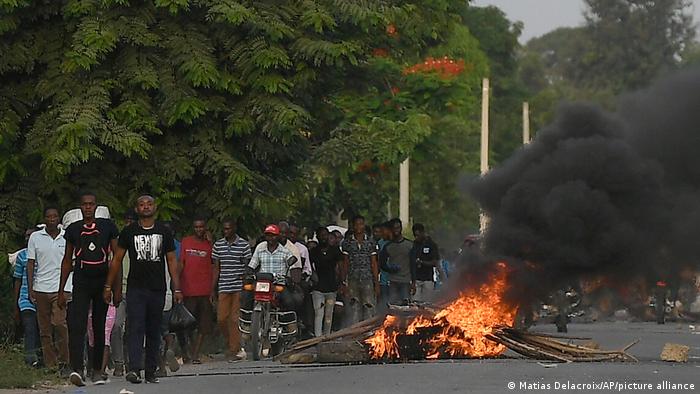 Violent unrest was reported in northern Haiti on Wednesday, as demonstrators vented their anger over the assassination of President Jovenel Moise, who will be buried on Friday. At least one person was killed in the violence.

The individual was shot in the community of Quartier-Morin, which is near Trou-du-Nord, where Moise was born.

Blockades were set up between the two communities, temporarily halting cars from entering or leaving, while plumes of black smoke rose nearby.

Protesters blame police for the assassination

National police chiefs arriving in Cap-Haitien to help oversee Moise's funeral were met with an acrimonious response from the slain president's supporters, who blame the police for his death on July 7.

Government officials claim Moise was murdered by a team of predominantly Colombian mercenaries, but many questions remain, with some Moise supporters suspecting that the president's security did not do enough to protect him.

Meanwhile, Moise's widow Martine showed up in public for the first time since returning from Miami last weekend.

Dressed in black, wearing a face mask and with her heavily plastered right arm in a sling, Martine Moise sat in silence beneath a portrait of the president as a priest delivered a eulogy to her late husband. 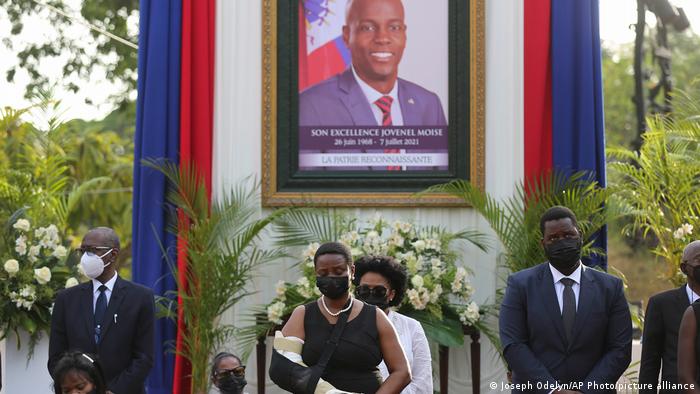 Martine Moise was injured in the attack at her husband's residence

Haiti: US, EU diplomats back rival to acting PM Joseph

"Core Group" ambassadors have urged Ariel Henry, designated as PM by President Moise before his death, to form a government. The move seems to bypass the current acting leader, Claude Joseph.

Haiti's interim PM Joseph says he will step down

Claude Joseph has said he will stand down to let Ariel Henry, the man designated as his successor by the assassinated president, take over as interim prime minister.