Protesters in Yemen remain skeptical of Saleh exit plan | World| Breaking news and perspectives from around the globe | DW | 24.04.2011

While Yemeni President Ali Abdullah Saleh has agreed to a plan that would have him resign, the popular movement demanding his immediate ouster has rejected it, saying his crimes cannot go unpunished. 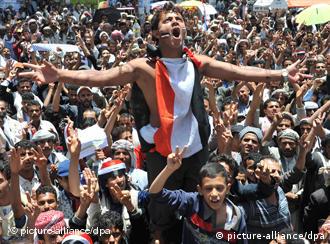 Many youths in the protest movement rejected the deal

Yemen's popular protest movement against President Ali Abdullah Saleh has rejected a deal that would see him step down in exchange for immunity from prosecution, as thousands continued to protest on the streets of the capital, Sanaa.

The Peaceful Change Revolution, an opposition group, restated its demand that the president step down and go before a court.

"The committee ... utterly rejects any initiative that would not stipulate the departure of Saleh and his family [from power] and putting him and his staff on trial," it said.

The deal, mediated by the Gulf Cooperation Council (GCC), would have Saleh step down within 30 days after asking the opposition to form a "national accord government" with his ruling party, the General People's Congress.

Yemen's vice president would then take over as interim president before calling a new presidential election within 60 days. The elected president would select a group to rewrite the constitution, which would be voted on in a referendum, making way for parliamentary elections. 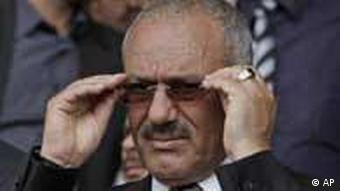 The plan was praised by the United States and the European Union, and accepted by both Saleh and political opposition parties. But protesters, many of them youths, saw the compromise as a betrayal of their demands.

"There's a lot of resentment among the youths because the opposition agreed to this initiative," Abdulhafez Muajeb, leader of a protest movement in the port city of Hudaida, told Reuters news agency. "From our end, we will escalate our protests until we force the president to step down immediately."

Meanwhile protesters camped out in Sanaa shouted: "No negotiation, no dialogue - resign or flee!"

In an interview with the BBC on Sunday, Saleh accused the West of supporting his opponents and the protesters of collaborating with al-Qaeda.

"You call on me from the US and Europe to hand over power," Saleh said. "Who shall I hand it over to. Those who are trying to make a coup? No. We will do it through ballot boxes and referendums."

Yemen's president agrees to step down on conditions

After more than three decades of rule, Yemeni President Ali Abdullah Saleh has accepted a plan that calls for him to resign from power within a month. In turn, Saleh will be immune from prosecution. (23.04.2011)

Thousands of Syrians called for the ouster of President Assad, while Yemenis demanded their leader step down. In both countries, protesters were shot by security forces. (17.04.2011)