The prosecution in the high-profile trial of Bayern Munich president Uli Hoeness has called for a prison sentence of five-and-a-half years for tax evasion. A verdict is expected on Thursday afternoon. 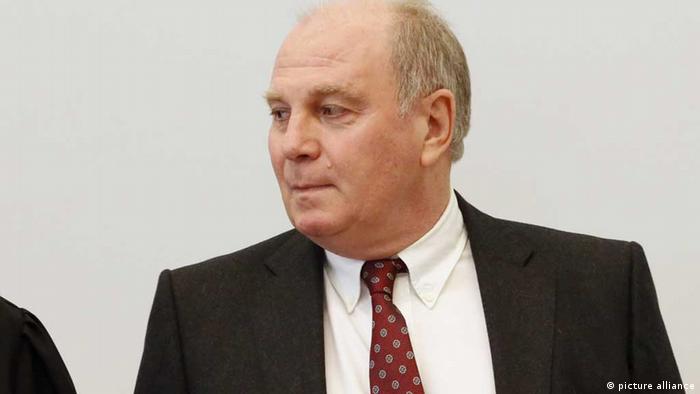 Summing up on Thursday, state prosecutor Achim von Engel called for a prison sentence of five-and-a-half years for Hoeness on seven counts of tax evasion.

Von Engel rejected Hoeness' defense that his voluntary disclosure last year of tax dodging carried out over the past decade should exempt him from a criminal conviction and prison.

Defense lawyer Feigen, for his part, said that Hoeness should receive at the most a suspended sentence - and only if the court found a self-disclosure made by Hoeness to tax authorities in January last year invalid.

If the voluntary confession were to be adjudged valid, however, the case against Hoeness should be closed, Feigen said. He said Hoeness' disclosure fulfilled all the requirements laid down by law, and contained merely an error in the way it was formulated.

The maximum term for major tax fraud under German law is 10 years, though sentences are usually shorter.

And then testimony given during the trial on Tuesday revealed that 62-year-old Hoeness in fact withheld 27.2 million euros ($37.91million) in tax.

The revelation has cast doubt on the degree of Hoeness' cooperation and transparency, increasing the likelihood of a jail sentence for the football legend.

On Wednesday, Hoeness' defense lawyer Hanns Feigen confirmed the 27.2-million-euro figure, telling the court that "the defense considers the figures accurate; we do not challenge them."

Any sentence handed down by the court is likely to depend on whether his confession was made early enough, before an investigation began of his tax affairs - and whether the disclosure was comprehensive.

But with the piecemeal information coming forth during the trial this week, doubt has been cast over whether this was the case.

Hoeness admitted he didn't come clean earlier, because he wanted to benefit from a tax deal Germany was negotiating with Switzerland, which would have granted amnesty to tax dodgers who confessed to authorities.

However, in December 2012 that deal was blocked by the German center-left opposition of the time, which wanted to see wealthy tax criminals prosecuted.

Hoeness, who also runs a successful sausage-making business, has helped turn Bayern into one of the world's top teams.

Thousands of Germans have paid back taxes to avoid prosecution as news of Hoeness' prosecution and trial hit the media. Chancellor Angela Merkel's ruling coalition has also come under increased pressure to crack down on tax evaders.