Prince Harry has been honored for his charity work with AIDS victims in a live TV gala on German television. Bettina Wulff, the wife of the German president, was on hand to present the award. 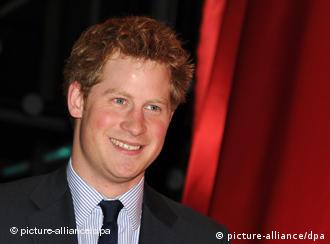 British Prince Harry was in Berlin to accept his award

"From the bottom of my heart, vielen Dank," said Harry, thanking the fundraising foundation in a mix of English and German. "Compared to so many people who devote their whole lives to restoring hope to children around the world, I have done very little."

Harry, the younger brother of Prince William, is patron to several children's and humanitarian aid charities. He cofounded the organization Sentebale to help young AIDS victims in Lesotho, inspired in part by his mother, the late Princess Diana. He urged viewers to support the organization, saying "Sentebale helps people in Lesotho to help themselves."

During the broadcast, viewers called in to pledge donations to "Ein Herz Fuer Kinder," which redistributes the funds to children's charities around the world. This year, the show raised 15.4 million euros ($20.4 million).

"Ein Herz Fuer Kinder" was set up in 1978 and has since raised more than 153 million euros for various charities.

The prince, on Sunday, laid a wreath at a memorial to those killed trying to escape from communist East Germany. The wreath was accompanied by a message reading, "For all those who have paid the ultimate sacrifice in pursuit of freedom. Harry."

Meanwhile, the British newspaper the Daily Mail reporting on Prince Harry online, showed little grasp of German history in an unfortunate headline mistake. The paper claimed Harry was laying a wreath for those "who tried to flee Hitler" rather than during the Soviet regime some 15 years later.

German fascination with British royalty both grandiose and banal

The German media and public are nearly as fascinated with the wedding of Prince William and Kate Middleton as the British press is - almost surprisingly so for a European country with no royal court of its own. (20.11.2010)