Preventing youth Salafism in Germany | Germany | News and in-depth reporting from Berlin and beyond | DW | 03.07.2014

Young people are increasingly drawn to Germany's Salafist movement. Experts are looking to determine why the Islamist group is so popular, and how to prevent young people from becoming jihadists. 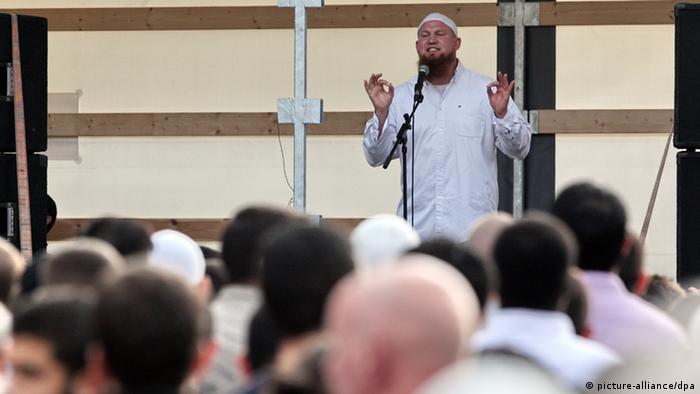 About 5,500 of the estimated 4 million Muslims living in Germany follow the Salafist teachings of Sunni Islam, and only a few hundred are prone to violence. Among German jihadists, 500 are in Syria, 20 have been killed and there are approximately 100 potentially dangerous returnees - that's the present balance of the Salafist Islamist movement in Germany.

But the movement is growing, and it's growing fast.

Germany's Federal Agency of Civil Education (BPB) invited experts earlier this week to discuss how best to inform teenagers and young adults about the dangers of Salafism.

Salafism is attractive to longstanding Muslims as well as new converts. "It's like an ersatz family for some youths, it's where they find recognition and security, it's a group of peers, no matter where they come from," said Claudia Dantschke, head of the office for Islamism and ultra-Nationalism at the Berlin-based Society for Democratic Culture. 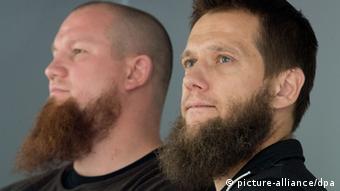 In cases where forging an identity based on country of origin or religion is usually complicated for immigrant children, the Salafists offer a simple message: "You're Muslim, and nothing else." Salafist preachers are role models for young people, they are leaders they can lean on, Dantschke added. "The preachers tell them what to think - in fact they think for them."

No need to reflect

Salafist recruiters are effective because they preach in German, often using teenage slang. They speak to problems that young people experience in their everyday lives, reaching out to the teens on topics like girlfriend or workplace woes, and responding with "seemingly religious answers," Dantschke explained.

Students with poor grades in school or those who have problems finding an apprenticeship position after graduation (as is typical practice in Germany) are given a simple reason for their problem: "You're not given a chance because you are Muslim, and Muslims are rejected." Critical or constructive reflection becomes superfluous, Dantschke said. Salafists seek to impart a sense that with them, on the other hand, young Muslims are always welcome.

"It's interesting that young people of differing backgrounds are susceptible to Salafist thinking," Claudia Dantschke said. Supporters come from more as well as from less-educated groups of society, or from families of varying religious devotion; they are both migrants and Germans. Salafism draws people of different nationalities and social backgrounds. "The only thing these young people have in common is that they are illiterate from a religious point of view." 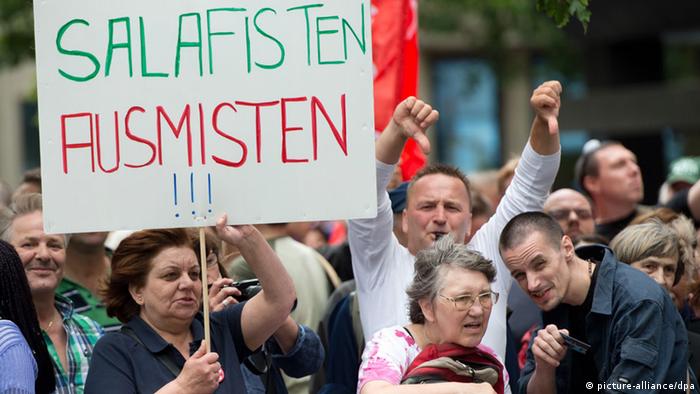 "Get rid of Salafists!" - a protest in Offenbach last month

With an eye on the combat-ready jihadist scene in Iraq and Syria, authorities in Germany are hoping prevention can help slow down the rising surge to the Salafist movement.

Ufuq, which in Arabic means perspectives, is one of Germany's more successful primary prevention projects. "We don't work with youngsters who have already mingled with the Salafists, we work with young people in schools and youth centers," said Jochen Müller, co-founder of the Berlin-based association, which was launched in 2007.

Teams armed with films on Islam in Germany and Salafism visit schools and youth centers, Müller explained. "We try to get the young people to discuss how they envision living out their faith, how they envision schoolwork in the classroom and what coexistence in a neighborhood and in society should look like."

The idea is to counter the young people's sense of not belonging and to communicate appreciation, Müller continued. "We've learned that once the youths start to think and speak for themselves - in particular on religious issues - they become immune to the Islamists' simple answers and concepts of the 'enemy.'" 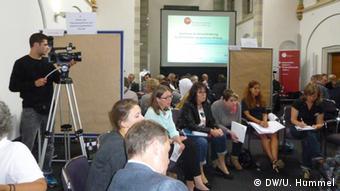 The BPB conference also looked at a novel approach to the issue - namely applying tested prevention methods from the field of right-wing extremism. "Once you start to listen to the young people and try to understand why they are interested in such ideologies - in other words, once you trust them - you often reach them," said Michaela Glaser, a sociologist at the German Youth Institute's Research Center for the Prevention of Rightwing Extremism and Xenophobia.

Showing interest and appreciation are both equally important in Salafism prevention work, she said, "in particular concerning people who are often still searching." Instead of hastily demonizing young people's attitudes, educators should tackle the early stages of Salafist indoctrination with questions and appreciation, Glaser concluded.

The number of Salafists in Germany is growing. Charismatic preachers successfully recruit young men. The ‘signpost’ project in North Rhine-Westphalia aims to prevent their radicalization. (06.12.2013)