Pressure is growing on euro-zone governments to cast their national interests to the side and give their shared currency a stronger voice on the global stage by seeking a single seat at the International Monetary Fund. 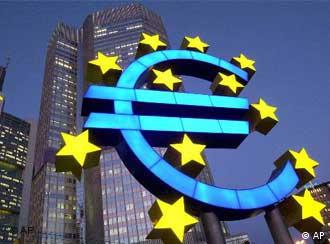 The euro would be stronger if the euro zone had a single IMF representative, say some

Calls to strengthen the euro's position at the IMF were made on Thursday, May 15, by two of the shared currency's most influential figures while addressing an Economic Forum in Brussels celebrating 10 years of the European Economic and Monetary Union (EMU).

"Our currency is the second most important in the world," said Joaquin Almunia, the European Union commissioner in charge of economic and monetary affairs. "Our policy decisions have a global impact and increasingly the euro area is helping to support the stability of the global economy and financial system.

"The logical next step will be to consolidate our representation and obtain a single seat in international forums," he added.

Almunia's ambitions are backed by Jean-Claude Juncker, the influential chairman of the 15-member euro group.

"In the long term, the euro zone will be represented in the IMF by one single seat," he said in his address to the forum participants, which include the finance ministers of France, the Netherlands and Spain as well as the president of the European Central Bank, Jean-Claude Trichet. 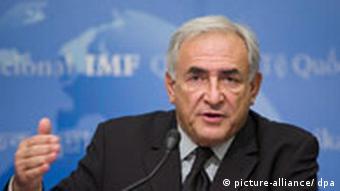 Calls of this kind are not new. But they are bound to resonate at a time of heightened financial instability and global economic slowdown.

While the euro has defied many critics to become an economic success story, most experts recognize that, politically, it is still punching below its weight.

But as IMF chief Dominique Strauss-Kahn pointed out in Brussels, "the Chinese are rarely interested in the euro exchange rate." He called that position a sign of the euro area lacking "the voice it should have."

Each of the 15 European countries that use the euro is currently represented individually at the IMF, an international organization that oversees the global financial system and thus plays a key role in the global economic arena.

Such divisions mean that, while the United States has strong voting powers, euro-zone heavyweights Germany and France do not.

"It makes sense for the euro zone, which is run by a single central bank, to have a common representation at the IMF," said Philip Whyte, a senior research fellow at the London-based Centre for European Reform.

"Unfortunately, I do not see it happening any time soon," he told German news agency DPA.

Whyte said "political jealousy" and resistance to having a country's representation downgraded in international forums are likely to stand in the way for years to come.

Juncker, who is also prime minister of Luxembourg, hinted that short-term changes were unlikely.

"Throughout the history of Europe, we have seen a battle between short term national interests and broader medium and long term objectives, and this kind of antagonism will continue," he said in his speech.

But euro member states will eventually understand that "the medium and long term benefits are greater than the short term costs," he added.

Juncker said future euro-zone finance ministers regularly speak in favor of a single representation at the IMF, only to backtrack once they assume office.

He then turned against what many experts identify as one of the greatest obstacles to euro-zone unity: France.

"[French President Nicolas] Sarkozy also talked about a single representation in the IMF before he became president," Juncker said. "He still has four years [in office]. I would encourage him to come back to this soon."

Germany's president Horst Koehler said that the crisis in the world financial markets came close to bringing about a general economic collapse. He called the markets a monster that needs to be put in check. (14.05.2008)

The Bank of England's plan to free up Britain's home loan market by injecting 50 billion pounds into the banking sector to ease the mortgage squeeze has come under scrutiny from the EU. (21.04.2008)

The Group of Seven has warned that the sputtering global economy needs vigorous measures to keep it from crashing. Finance chiefs outlined several immediate steps for improvement at their meeting in Washington. (12.04.2008)

A bailout from the International Monetary Fund will be critical in stabilizing Sri Lanka's finances, but critics say the Indian Ocean island needs to tackle food insecurity and political instability first.

Bitcoin was beginning to look like a better store of value than traditional currencies — even gold — until the cryptocurrency crashed 44% last month. DW unpicks the complicated world of currencies.