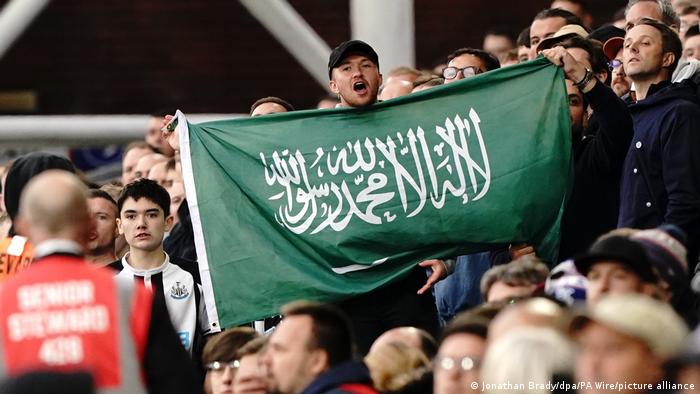 They are proud of their national colors in Saudi Arabia: All things considered to be of importance in the Gulf state tend to come in green and white. So it comes as no coincidence that Premier League club Newcastle United's new away kit features the same color scheme. The classic badge featuring two seahorses remains, but for the first time, instead of it being mainly grey, black and white, it is green and white.

Newcastle fans will have to get used to this departure from tradition, after the team from the northeast of England was taken over by a Saudi consortium for around €400 million ($397 million) roughly a year ago. The sale of Newcastle United was one of the most protracted and controversial takeovers in the history of English football, mainly because of who was doing the investing. 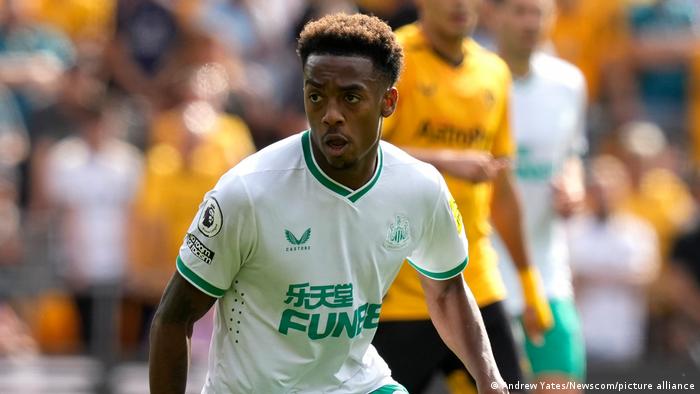 Joe Willock sporting Newcastle's green-and-white jerseys, which has taken fans time to get used to

Saudi Arabia, which has been repeatedly criticized by human rights organizations, has had a huge image problem since the murder of journalist Jamal Khashoggi in the country's consulate in Istanbul in October 2018. The consortium that took over the club is 80% owned by Saudi Arabia's sovereign wealth fund, the PIF (Public Investment Fund). The news of the takeover bid immediately sparked speculation about the motives behind it, with critics seeing it as an effort to polish up their tattered reputation through sports – a practice that has become known as "sports washing."

'It's all about image'

"For Saudi Arabia, the English market in particular is an enormously important trading partner. And they have seen in their neighborhood how you can significantly improve your image via a successfully supported football club," Sebastian Sons of the Bonn-based think tank Center for Applied Research in Partnership with the Orient (CARPO) told DW. Sons has been traveling to the region for years in his role as a researcher on Islam.

The neighboring United Arab Emirates (UAE) and Qatar in particular, have served as models for the Saudis. Qatar may seem like a strange example for Saudi Arabia to follow on any issue, as Riyadh has long been at loggerheads with Doha. Since the 1990s, the small emirate has intensified its efforts to raise its international profile and present itself as an attractive regional partner. When, in 2010, Qatar secured the rights to host the 2022 World Cup, Qatar emerged from the shadow of its much bigger neighbor.

'The goal was to weaken Qatar'

Qatar's rise has been a thorn in the side of several of its neighbors, who have sought to put the tiny emirate in its place. The situation escalated in 2017 when Saudi Arabia, the UAE, Bahrain and Egypt united to impose a blockade of Qatar that lasted until 2021.

"The goal was to isolate and weaken Qatar so much that it would see the small neighbor's right to host the World Cup withdrawn," Sons explained. At the same time, though, "there was a growing realization in the Gulf states that Qatar's path wasn't all that bad, and that it would make sense for the entire region to close ranks." 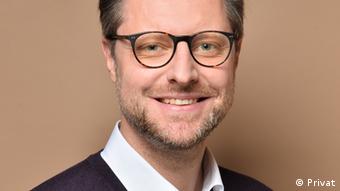 So instead of continuing to work at weakening its small neighbor, Saudi Arabia decided to more or less copy what Qatar and its other neighbor, the UAE  were doing – at least in terms of their activities in the global football market.

The UAE has been heavily involved in English football since 2004, when one of its flag-carrier airlines, Emirates, became a sponsor. In 2006 Arsenal's new home ground adopted the corporate moniker "Emirates Stadium." The UAE capital, Abu Dhabi, went even further,taking over the then-financially struggling Premier League club Manchester City in 2008, going on to transform it into a top international player.

Qatar dipped its foot into club football in 2010, when it reached a deal to become Barcelona's first jersey sponsor. This was followed in 2011 by the takeover of the Paris St. Germain by Qatar Sports Investment (QSI), which is under the control of the Qatari sovereign wealth fund. In addition, relations with Bayern Munich were intensified, with the club's winter training camp being held in Qatar for the past several years.

In autumn of 2021, Saudi Arabia followed suit by buying Newcastle United. The aim being for the traditional club to be built into an international heavyweight using the Gulf state's oil money. Crown Prince Mohammed bin Salman, known as "MBS" for short, is driving a charm offensive to improve his country's reputation, especially after the Khashoggi murder.

"They want to become socially acceptable again in order to establish themselves as an interesting and approachable economic partner," said Sons.

It seems this has already had the desired effect, with the Chinese, US and French heads of state having recently visited the country. German Chancellor Olaf Scholz is due to travel to Riyadh next week.

There has also been considerable investment in domestic football as they look to transform the country from a football dwarf into a football giant. In September 2021, the Saudi Arabian Football Federation (SAFF) unveiled its vision "Our Tactics for Tomorrow" with seven cornerstones and the aim of establishing the men's national team among the top 20 in the world by the 2034 World Cup.

Women's football to be strengthened

Included in the SAFF's roadmap also included the promotion of women's football with 11-a-side competitions for girls set to be established throughout the country. In addition, men's clubs will soon be allowed to admit women – a milestone in an otherwise deeply conservative desert state where women were not even allowed to drive until 2017. 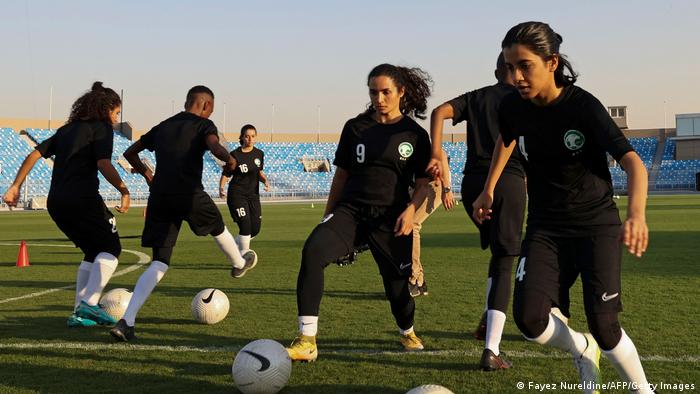 "They are serious," said Monika Staab. The German has been employed in the country as a national coach for two years and has seen first-hand the steps taken.

"The women's football project has been adopted by the regular football association. They support me and my work 100% and the progress is enormous."

Newcastle United fans, meanwhile, will not only have to break with their traditions, but exercise patience too. Unlike Qatar, which has clearly set its sights on winning the Champions League after investing millions into Paris St Germain, Saudi Arabia is taking a more cautious approach. Instead of signing the biggest superstars available this summer, Newcastle brought in solid players with international class to keep the recently relegation-threatened club in the league.

In addition, investments were initially made in the backroom staff to build a more efficient, professional and loyal team. After installing a new sporting director, Dan Ashworth, who was hired in February, Newcastle hired a new executive chairman in Darren Eales. There has also been investment in new analysts, sports scientists, physiotherapists and in new jerseys – which are now in Saudi colours.

Premier League clubs have dwarfed their rivals in the transfer market this European summer, spending more than €2 billion on new players.

In the eyes of their wealthy Gulf owners, PSG and Manchester City are little more than an extension of state. As a result, Tuesday's Champions League game between the two is also a showdown between two hostile nations.