For the past month students have been protesting against the government in Venezuela. It has resorted to violence in an attempt to stop them, but President Nicolas Maduro's days seem to be numbered. 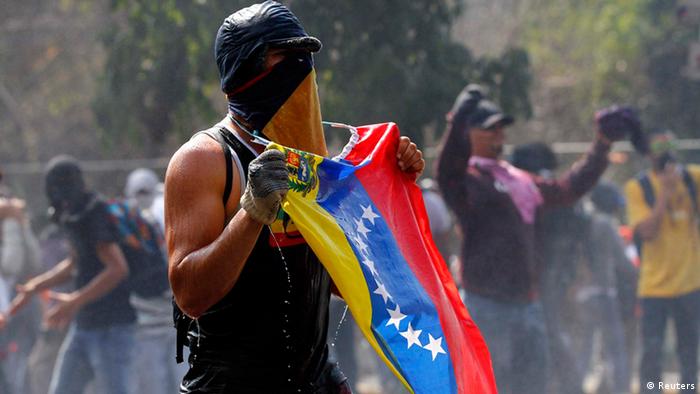 One by one, the Venezuelan regime's supporters are deserting it. And now even German Heinz Dieterich, the left-wing political analyst who was the main ideologue to late President Hugo Chavez, says the days of the government in Caracas are numbered: President Nicolas Maduro has at most a couple of weeks left - so incapable was the regime at solving the country's problems.

Only the number of victims changes

But for the time being, Maduro is still holding the rains, however loosely. After more than a month of protests and their violent suppression, the only thing that changes from one day to the next in Venezuela is the numbers of dead, injured and arrested, which is rising steadily. And the tone is becoming sharper: The president celebrates his bellicose, if shopworn, far-left rhetoric, while opposition students venture onto the streets of major cities to risk their lives every day.

But for now, there is no chance of dialogue with government supporters. The 24-year-old football coach Jacksy Silva is typical. She says "if they were demonstrators, they would have slogans and banners, and would draw attention to themselves with their voices alone. And they would not be rampaging through the streets, beating people. These are not students, but a pack of vandals that wants to destroy our revolution." 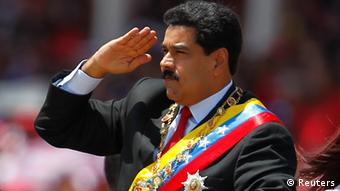 Venezuela's President Maduro is losing support for his government

On the other hand, more and more students say the Maduro government has lost its legitimacy and want to continue the protests - until the end. "We are fighting here," student Vanessa Eissig says, "because we want to work here. Because we want to have children here. In Venezuela, there are many capable people. People like us. We fight for the country, because we believe in it."

What comes after the conflict?

Maduro has rejected most mediation offers as "interference in Venezuela's internal affairs." He considers the Organization of American States (OAS) in particular a lackey of the United States. Now the foreign ministers of the South American UNASUR countries, which are broadly sympathetic to Chavism, have started a dialogue - an enormous foreign policy success for Maduro. At the same time he shows how the conflict in Venezuela has split the continent into countries that have expressed their solidarity with the regime in Caracas, and those calling for an end to the conflict and state repression.

But no one currently seems to have a clear idea what is to come after that. Even the opposition hardly trusts anyone to unite and rebuild the deeply divided country. Nevertheless, changes are inevitable, says Diego Moya Ocampos, Latin America analyst at the US economic information service IHS: "A perfect storm is brewing in Venezuela. What we are seeing in Venezuela is a political vacuum left unfilled since Chavez's death, escalating pro and anti-government protests and a further contraction of the economy in 2014 and 2015, with record high inflation levels and shortages of food and basic goods, including medicines. It's a perfect storm that could lead to big changes in the country." 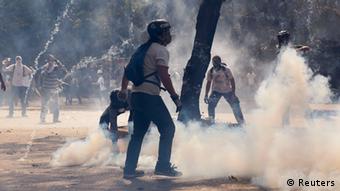 The solution must come from within

But even the US, which now openly criticizes the Maduro regime with harsh words, doesn't seem to have a plan for the post-Maduro era, the MacMillan Center for International Studies at Yale University says. "The US has a long history of supporting subversive movements that after reaching power had disastrous long-term effects on the country," Steve Ellner wrote on its website.

So a solution for the country must probably come from within. Although the Maduro government is still trying to take a hard line against the protests, it is falling apart behind the scenes. Even diehard Chavists in high office now oppose state violence and repression of the protests. And the discontent with the president and his policies is even growing among those who actually support the government's policies. If the protests of the urban, middle-class neighborhoods spread to the Chavist strongholds in the slums, further instability looms.

The military is waiting

"The weaker the government becomes, the stronger the influence of the armed forces behind the scenes," Moya Ocampos wrote. "The ongoing political and economic difficulties are likely to continue increasing the potential for divisions between the ruling PSUV party and the armed forces; something that could eventually lead to a direct or indirect military intervention to guarantee political stability." And Nicolas Maduro is not considered a man of the armed forces. They sympathize more with the parliamentary president and Maduro opponent Diosdado Cabello.

President Maduro does not have many friends - or evidently much time.

President Nicolas Maduro has announced a break in ties with Panama on the anniversary of Hugo Chavez's death. Panama had called for an Organization of American States meeting on the unrest in Venezuela. (06.03.2014)

Chile's first female president has started her second term. Expectations are high. Now it's up to her to prove that she can really implement the promised reforms, and a strong majority in Santiago suggests she can. (12.03.2014)

At least a dozen Venezuelans have died in recent protests. DW hears from Caracas-based journalist Irene Caselli about why Venezuelans are taking to the street - and whether they'll find success in coming weeks. (28.02.2014)