Possible Mass Grave of Nazi Victims Unearthed in Kassel | Germany| News and in-depth reporting from Berlin and beyond | DW | 23.01.2008

Construction has been stopped on a site in the city of Kassel, where at least 36 human skeletons have been found over the past week. The bodies may have been forced laborers in a World War II factory. 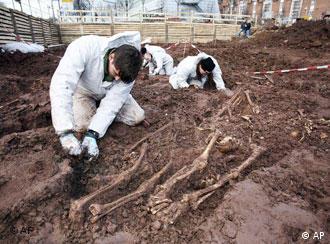 The public prosecutor's office ordered a halt to work on the site after ever more skeletons were discovered in the course of construction work to expand the University of Kassel.

"It could well be that more skeletons are found," police spokeswoman Sabine Knöll told the Associated Press. "We're prepared for anything."

The site was the location of a train engine and tank factory that employed thousands of forced laborers during World War II, said city archivist Frank-Roland Klaube.

Four skeletons were found last week and another 24 on Tuesday, Jan. 22. By Wednesday, the number of discoveries had risen to at least 36.

Forensic specialists are due to excavate and examine the skeletons at Kassel's university. The results of their investigations were not expected until next week, at the earliest.

The police said the skeletons were thought to be at least 50 and at most 100 years old.

Beyond law and order

Archivist Klaube said the skeletons wore neither watches nor rings, which gave credence to the possibility of them having been forced laborers rather than bombing victims, who would likely have been hastily buried.

The site had also been the location of a hospital until 1870, Klaube added. The dead could thus have been the victims of an epidemic, but only if the estimate that they were no older than 100 years was incorrect.

"In any case, one can say that such a big group of people could only be buried in a time in which law and order in Germany were out of joint," he told AP.

An extensive collection of Holocaust records was finally unlocked to the public on Wednesday, Nov. 28, more than 60 years after its creation to trace millions of victims of the Nazi regime. (28.11.2007)