Pope Urges Faithful to Stand Up for Beliefs Against ″Fanaticism″ | Germany | News and in-depth reporting from Berlin and beyond | DW | 12.09.2006

Pope Benedict XVI urged pilgrims at a giant open-air mass in Regensburg to stand up for their beliefs in the face of the "hatred and fanaticism" tarnishing religion. 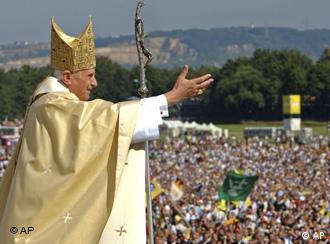 Pope Benedict XVI during Mass at Islinger Field, near Regensburg

People streamed onto a field near Regensburg early Tuesday, where Pope Benedict XVI held his final outdoor mass during a six-day visit to his native Bavaria. An estimated 250,000 pilgrims carrying Vatican flags and folding chairs went to the field for the mass, some arriving Monday evening to spend the night singing hymns under clear skies.

For Tuesday morning's mass, hundreds of priests and deacons in white robes arrived in a long procession, reciting a litany of prayers. They lined up in two columns and streamed toward the raised altar as the rest of the crowds filed in.

An appeal to faith 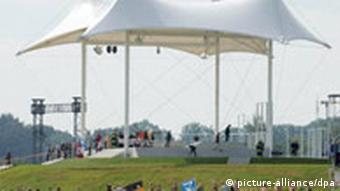 Pilgrims went to Islinger Field on Sept. 2, when the area was blessed

"Today, when we have learned to recognize the pathologies and life-threatening diseases associated with religion and reason, and the ways that God's image can be destroyed by hatred and fanaticism, it is important to state clearly the God in whom we believe," said the pope, as reported by AFP.

After the sermon, a young man charged toward the altar where the pope was sitting, but he was stopped by plain-clothes police officers. Officials said the pontiff was not in danger.

"It was not a serious disruption to security. It was apparently a young fan who, in his excitement, wanted to reach the altar," said Hans Schaidinger, mayor of Regensburg. 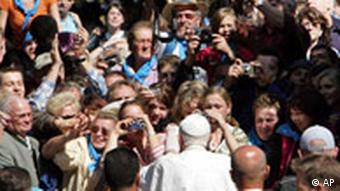 The pope was a magnet for Monday's crowds in Altötting, southern Germany

Later on Tuesday, the fourth day of the pontiff's nostalgic tour of the southern German region where he was born and grew up, Benedict delivered a lengthy theological speech to
staff and students at the University of Regensburg, where he was a professor of theology and vice-president from 1969 to 1977.

"It is a moving experience for me to stand and give a lecture at this university podium once again," he said. At 32 minutes, the address was the longest of his six-day visit, which ends Thursday.

Reiterating his concerns about a modern world "deaf" to God, he warned that other religious cultures like Islam saw the West's exclusion of God "as an attack on their most profound convictions."

"A reason which is deaf to the divine and which relegates
religion into the realm of subcultures is incapable of entering into the dialogue of cultures," he said.

The pope will round off his visit to the city by holding an ecumenical prayer service in Regenburg's cathedral.

During his stay in Bavaria, Pope Benedict XVI has visited Munich, where he served as archbishop from 1977 to 1982 as Cardinal Joseph Ratzinger, and his birthplace, Markt Am Inn. During Sunday's mass in Munich, the Catholic leader warned modern societies of putting too much faith into science and technology, saying it made people "deaf" to God's message.

He also mildly criticized the church in his native Germany for neglecting evangelism in favor of aid and social service projects.

The pope has reaped both praise and criticism during his visit. The Green party has criticized him for his limited view on freedom of expression.

Claudia Roth, head of the Green party, said Monday evening: "It is unacceptable when Pope Benedict XVI wants to exclude criticism of religion from freedom of expression," she said. This contradicts the notion of a pluralistic, modern and open society, she added. 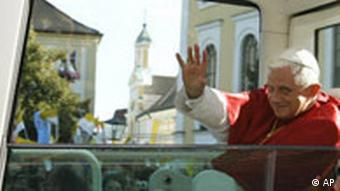 The pontiff has avoided social and political issues during his visit

Lale Akgün, the Social Democrats' expert on Islamic issues, has demanded more tolerance from the pope toward alternative lifestyles.

While she has praised the pontiff for encouraging better integration of Muslim citizens into society, she said the Catholic Church could be more tolerant toward homosexuals, and complained of the Church's attitude toward abortion and contraception.

"I would be quite pleased if the pope could be just as tolerant and understanding of the diversity of human life by being more accepting of gays and lesbians and same-sex marriages," she said.

Even from his own ranks, the pope has attracted criticism. Matthias Weisner, spokesman for the Catholic reform movement "Wir sind Kirche" (We're the Church) said on Monday, "The Vatican's rigid sexual morals prevents many people from living out their Catholic faith within the Church."

Weisner added that women should gain better access to leadership positions within the Roman Catholic Church.

This is Pope Benedict XVI's second trip to his native Germany -- after a visit to World Youth Day in Cologne last August -- since his election as pontiff in April 2005.

Even a last-minute paint attack on the house where Benedict XVI was born didn’t unnerve the residents of the village of Marktl, who are eagerly awaiting the pope’s flying visit on Monday. (Sept. 11, 2006)