Gay Rights Activists Stage Protest Ahead of Pope Visit | Germany | News and in-depth reporting from Berlin and beyond | DW | 08.09.2006

While hundreds of thousands are expected to cheer Pope Benedict XVI when he visits Bavaria starting Saturday, his critics got a chance to speak up on Friday -- respectfully, that is. 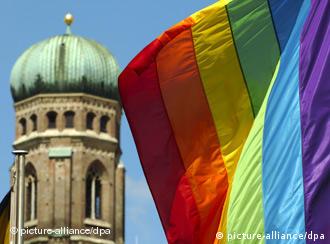 The pope's stance on homosexuality has riled gay activists

On Friday, Pope Benedict's most visible critics -- at least for the coming days -- quietly gathered in the centre of Munich.

It was the only official demonstration scheduled to take place during the pontiff's visit. In a state with regions where up to 87 percent of the population are Catholic, at least on paper, few seemed interested in standing up against Bavarian-born Benedict. 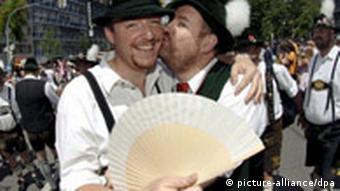 Gay rights activists were also cautious after police officials pulled an effigy of Pope Benedict and altered photographs of the pope with a condom on his little finger from a float during Munich's gay pride parade in August. A complaint for insulting a foreign head of state was filed against the float's creators, but prosecutors apparently decided to drop the case.

Nevertheless, a dozen gay rights activists pulled out signs that read "For tolerance" and "Against discrimination" and "We want acceptance, not empathy" from their bags. They waited for people to come and listen. A little distance away, almost as many police officers observed the scene.

"I was afraid that not many people would come," said Peter Schauwecker, a 70-year-old artist and former university professor, who wore a sign protesting against the waste of taxpayers' money for the pope visit.

The costs of the pope's six-day visit will reportedly run to about 20 million euros ($25.6 million). The three Bavarian dioceses of Munich, Passau and Regensburg that Benedict will travel to are picking up the bill while the Bavarian state will pay for security.

Adding fuel to the fire?

But most of the around 100 demonstrators who eventually gathered near Munich's memorial for AIDS victims were less concerned about money and more about Benedict's views on homosexuality.

"I believe we need to see and reflect on the fact that it's not a Catholic invention that man and woman are made for each other, so that humanity can go on living: all cultures know this," the pope recently said in an interview with DW-TV, German broadcasters ARD and ZDF and Radio Vatican. 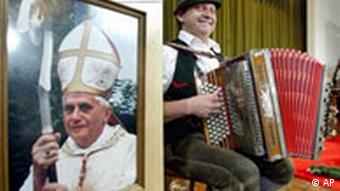 Bavarians are gearing up for Pope Benedict's visit

While still Cardinal Joseph Ratzinger, he reportedly also called gay marriage the "legalization of evil," a statement that especially outraged many of those present.

"I think it's irresponsible that he adds fuel to the fire," said Ulrike Gehrig, pointing to the violence many gay people still face in many countries around the world, including several in eastern Europe.

"I consider the pope my personal enemy," said Gabriel Walser, who had also joined the demonstration. "But we have to offer him the respect we demand from him."

Respectful criticism was also what organizers had in mind.

Niederbühl added that he had no problem meeting Benedict face to face -- he shook his hand during an audience for Munich officials in Rome last October and said he plans to attend a ceremony on Saturday during which the pope will sign the city's Golden Book.

"I'm not going to exclude myself," he said. "It's the Catholic Church that has never bothered to enter a dialogue with us."

Why should it, asked Annalisa, a 40-year-old secretary, who observed the demonstration from afar.

"The pope cannot do anything but say that it's not all right," she said. "I see it this way: The church has a point of view and if I join a club, I also have to accept its rules."

But, not all agree.

"It's not a club," Niederbühl said, adding that he studied theology to become a religious education teacher but did not receive permission to teach from the church. "You can't just leave your family."

When Joseph Ratzinger was elected pope, he got mixed reactions in his native Germany, with many reform-oriented groups fearing the bite of the man known as "God's Rottweiler." Now, some critics have changed their tune. (April 18, 2006)

Germany's own son, Pope Benedict XVI, is to visit his native country on Saturday. His agenda includes a trip down memory lane. A slew of security measures are necessary to keep the pope pandemonium to a minimum. (Sept. 8, 2006)

A former guard at Sachsenhausen has claimed that he "knew nothing" about the thousands of murders that took place at the concentration camp. He is accused of aiding in the killing of more than 3,500 prisoners.

German politicians have called on police to help enforce COVID rules that business owners have been left to implement. One minister said issuing fewer parking tickets is more sensible than ignoring rule breakers.