Guanabara Bay in Rio de Janeiro is a dumping ground for sewage, trash and heavy metals. It's also where the Olympic sailing competitions will be held. Athletes and residents are worried about possible health impacts. 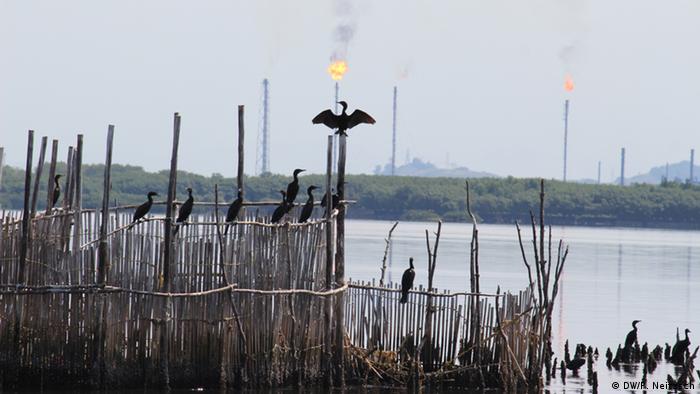 Alex Sandro dos Santos stands on the old wooden jetty that runs from the shore of the Tubiacanga settlement to the fishing boats. He has lived here, in Rio de Janeiro's north, for more than 40 years. And he's been fishing in Guanabara Bay since the age of 10.

"There are still 20,000 fishermen here, and each of them has three or four children to take care of," dos Santos says. "But it's no longer possible to live off fishing because of the decline in fish population."

The reason behind the shrinking fish numbers confronts anyone who dares to venture onto the dock. It stinks of sewage and rubbish. Plastic bottles, shoes, and even whole pieces of furniture float in the water. It's a fetid, filthy mass.

Across the bay, the panorama is dominated by the chimneys of oil refineries and the sprawling sea of houses making up Rio de Janeiro. Raw sewage from the metropolis flows right into the bay - at a rate of 18,000 liters per second, to be exact. "Many fishermen work part time as waiters to earn some extra money," dos Santos says. He himself builds wooden crates to keep his finances afloat. 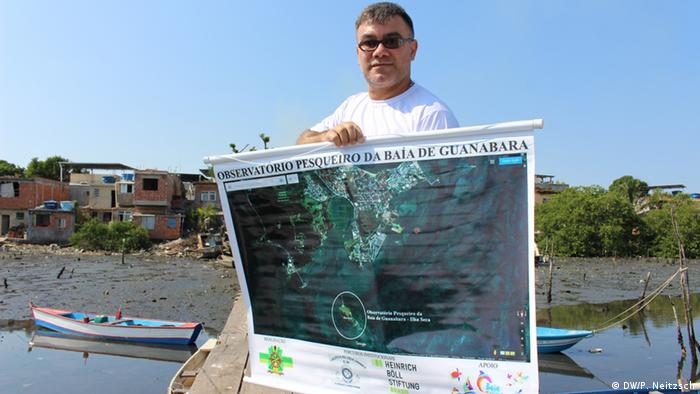 The heavy industry nearby has also been dumping its highly toxic waste in the bay for decades. The sludge below, at a depth of 32 meters (105 feet), is contaminated with heavy metals, while the bay's water is polluted with multiresistant bacteria. A ruptured pipeline in January 2000 sent more than a million liters of oil flooding into the bay and the bioreserve of the adjacent mangrove swamp. Many residents from the area are still waiting for compensation from the state-run oil giant, Petrobras.

German sailor Erik Heil fell ill in 2015 after a test regatta in the bay. He suffered inflammation of the legs and hips, which only improved after he was given broad-spectrum antibiotics back in Berlin. Many athletes have voiced concerns about competing in the contaminated bay, vowing to take precautions to avoid skin contact with the water.

Another German sailor, Heiko Kröger, who won a gold medal at the Paralympics in 2000, has sharply criticized the IOC: "I wouldn't be able to sleep if I were them," he said. Experts have also warned it's likely the bacteria in the bay could trigger worse diseases than the inflammation suffered by Heil. Marine biologist Mario Moscatelli, who has been monitoring and testing Rio's waterways, says the possibility of meningitis in the bacterial density, for example, cannot be ruled out.

"Athletes should certainly be vaccinated against Hepatitis A before they compete in Rio," said the biologist, who for many years has spoken out about the appalling state of the bay. 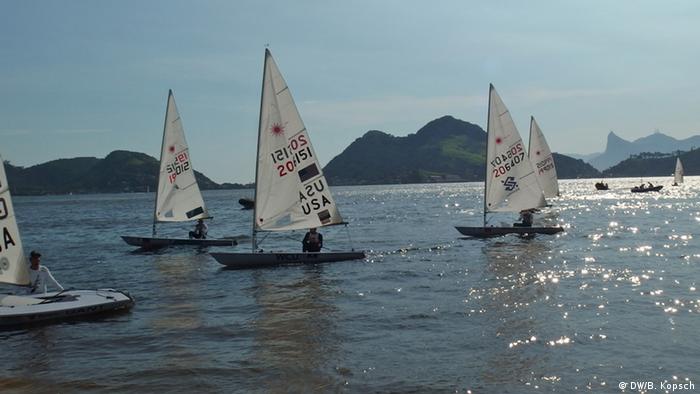 Sérgio Ricardo has also been working for many years to raise awareness about the environmental catastrophe in Guanabara. The ecologist's T-shirt bears the slogan: "Viva la Baía," or "Long live the bay."

Life still exists in the water, he says, mainly thanks to a small influx of fresh water from the Atlantic. "We call that the 'Miracle of Guanabara.' Here there are all kinds of species, except whales," Ricardo says. At the same time, the sewage and 100-odd tons of rubbish that end up here each day are continuing to destroy life.

Ricardo takes a boat out across the bay to demonstrate the full extent of the damage - and to show that all efforts to clean up the bay thus far have failed. And yet it's these very measures the IOC points to in response to criticism over Rio's preparedness and the state of Guanabara. 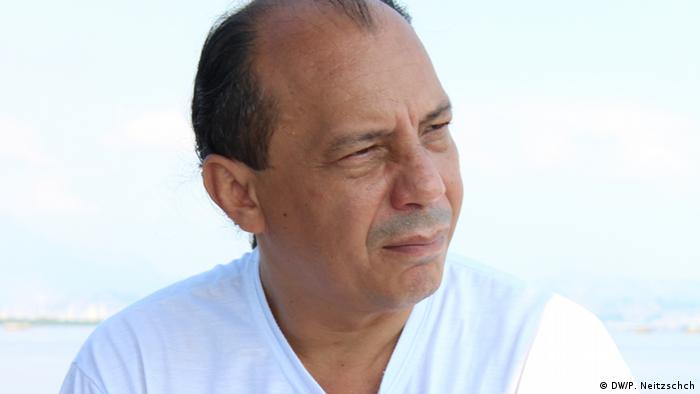 The federal state of Rio de Janeiro recently promised to clean up the bay for the Olympics, but little has improved. There have been several attempts to tackle the pollution. Between 1994 and 2006 the state invested more than 1 billion euros, with the support of the Inter-American Development Bank and the Japanese International Cooperation Agency, to construct sewage treatment plants.

Most of the connecting pipes were simply forgotten during construction, and they're still missing today. As a result, the bulk of the water continues to flow untreated into the bay. Meanwhile, the six built plants have been left to decay. "The program hardly made an impact," says Ricardo. "Instead, the government tried cosmetic measures - for example, getting boats to fish the rubbish out of the water." 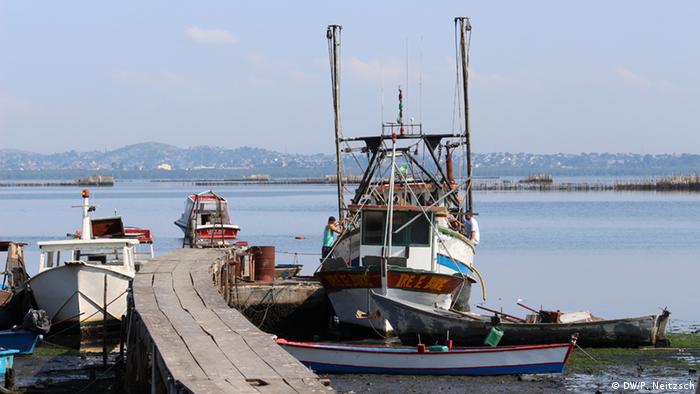 The fishing village of Tubiacanga, on the edge of Guanabara Bay, lies near Rio's international airport

Money down the drain

In 2013, a second cleaning-up program was launched. More than 200 million euros were invested, but much of that money was gobbled up by corruption and bureaucracy. Another issue was the fact that, although households were connected to sewage systems, their waste didn't end up in a treatment plant. A number of institutions at local, regional and federal levels were involved in the project.

Experts like Sérgio Ricardo insist that cleaning up the bay is a long term project that will only begin to make a difference after around 20 years' of work. Attempts at a quick fix in time for the Olympics have achieved nothing, he says.

"Canals and lagoons would need to be built," Ricardo says, adding that the disused rubbish dump near the bay must also be removed. "Combined with the rubbish that comes from Rio, it's like the bay's molotov cocktail."

It's also possible that in the coming years the oil industry will continue drilling in the bay, where a wealth of deposits are lying dormant around 7,000 meters below the surface. The Brazilian economy is dependent on commodities. And whether filter technology is enough to offset the intensive industrial activity is questionable.

"We'd hoped that things would improve with the Olympics, but nothing has happened," says fisherman Alex Sandro dos Santos. "The hope is zero." That's why he thinks it is important for the remaining fishermen to take their destiny into their own hands.

Dos Santos has set up a local fish monitoring center in Guanabara that highlights the bay's problems and suggests alternative programs for fishermen - such as breeding fish in former oil tanks.

Despite all the rubbish, oil and heavy metals, the 48-year-old says there is one thing that's clear: "The fish in the bay still end up on plates, in spite of the debate." He says with pride that he hasn't yet been taken ill. "I am the picture of good health," he adds with a laugh. Before he goes, he offers one departing tip: The fish from Guanabara are best enjoyed with an ice cold beer.

Brazil gears up for 2016 Summer Olympics

Brazilian metropolis Rio de Janeiro has a lot to do before hosting the Summer Games, including overcoming economic crisis and cleaning up its harbor. Eight months before the Games begin, here's a progress report. (05.01.2016)

With the Rio 2016 Olympics looming, environmentalist Mario Moscatelli says authorities need to be forced into action to clean up the city's polluted rivers and bays. (14.08.2015)