Malgorzata Gersdorf has defied a controversial new Polish law forcing all judges into retirement at 65. A former labor leader who helped topple Communism in the country has warned of a potential "civil war." 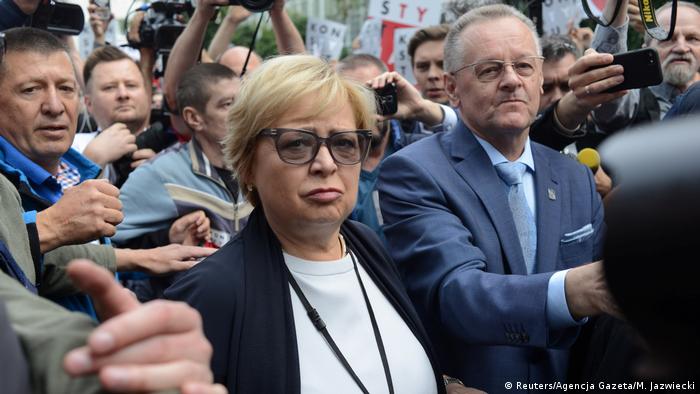 The president of Poland's Supreme Court appeared at work on Wednesday in defiance of a new retirement law that critics say is part of an effort by the country's right-wing government to undermine the rule of law.

Several thousand people greeted Chief Justice Malgorzata Gersdorf as she made her way into the Supreme Court building in Warsaw.

Thousands had gathered there the night before to protest the Law and Justice (PiS) party's reform, which came into effect at midnight. The reform lowers the retirement age for judges from 70 to 65.

Of the court's 76 judges, 27 are affected by the new law, and the reform could effectively cut short their six-year terms and allow the government to stack the body in its favor.

Gersdorf said the reform was a "purge of the Supreme Court conducted under the guise of retirement reform."

The 66-year-old has refused to comply with the reform, which requires her to step down immediately, cutting short her tenure slated to end in 2020.

"I'm not engaging in politics; I'm doing this to defend the rule of law and to testify to the truth about the line between the constitution and the violation of the constitution," Gersdorf told the crowd when she left the court.

"I hope that legal order will return to Poland," she said, adding that "values are the most important and we have to apply and demand those values."

Gersdorf had told DW on Tuesday that she had no intention of leaving her post before the end of her term under the constitution.

"The constitution guarantees me this venerable post for six years, and I see no reason why I should file a petition with the executive branch about it," she said. The court's other judges support her view.

Gersdorf said that she would "go on vacation" after her appearance at work on Wednesday and that she had named Jozef Iwulski as a temporary replacement during her absence.

Presidential aide Pawel Mucha dismissed Gersdorf's remarks and told reporters Gersdorf was "going into retirement in accordance with the law," insisting the Supreme Court was now "headed by Judge Jozef Iwulski," who had been chosen by the president. 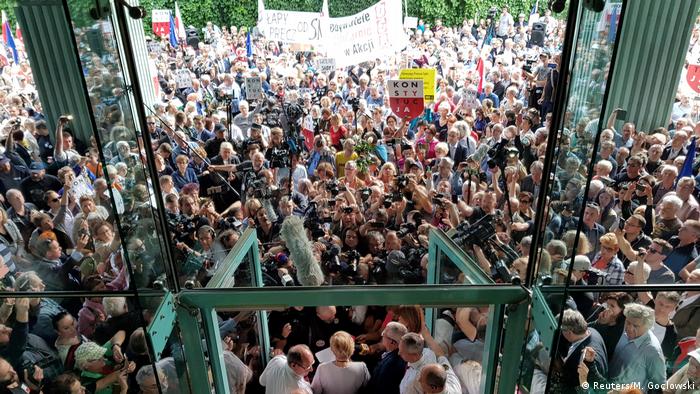 Responding to criticism over the reforms, Prime Minister Mateusz Morawiecki told the European Parliament on Wednesday that EU states have the "right" to create their own legal systems.

The European Commission launched legal action against Poland over the reform on Monday, which could eventually see some of Poland's privileges as an EU member suspended.

"Respecting national identities is part of the trust that must be built in the EU," Morawiecki said. "Every country has a right to set up its legal system in line with its own traditions."

Countering Morawiecki, European Commission Vice President Valdis Dombrovskis said the EU "cannot simply turn a blind eye" if there is a systemic threat to the rule of law.

"Where the separation of powers is weakened in one country or the independence of the judiciary is challenged in another, it becomes a European issue which affects our whole community," Dombrovskis told the European Parliament.

"We always remain open for dialogue but so far it has not been enough. I hope that last week's hearing will lead to further changes in Polish legislation and that we will not see 40 percent of the Supreme Court judges replaced."

PiS says judges are in for a 'disastrous defeat'

The ruling PiS party says the changes are necessary to jolt the justice system, which they say is controlled by an untouchable "caste" of judges steeped in communist-era mentality. Critics counter that it is PiS which is systematically dismantling any post-Communist institutions designed to rein in government's power and protect democracy.

In a joint statement on Tuesday, Poland's three biggest opposition parties had called for the protests across the country. Borys Budka, a Civic Platform opposition lawmaker, said the protests were being called "to show that there is no agreement for a takeover of another independent institution."

Legendary anti-Communist dissident Lech Walesa was among the leaders of the movement protesting the reforms in Warsaw on Wednesday. But the former trade unionist complained about the low numbers of protesters amid hopes that more than 4,000 would show up to the demonstrations.

"With such an amount we will not win much," Walesa said in front of protesters. "It is getting serious when they ruin our
courts. Really, sooner or later this may lead to a civil war."

Since returning to power in 2015, the nationalist PiS has worked to increase its power over the media and the judiciary. The push has led to clashes with other EU members and the central administration in Brussels.

A proposed reform of Poland's supreme court has been described as the latest step in a string of assaults on the independence of the judiciary by Poland's ruling right-wing Law and Justice Party. (19.07.2017)