Polish Prime Minister to Break Up Coalition, Push for Early Poll | Europe | News and current affairs from around the continent | DW | 11.08.2007

Poland's Prime Minister Jaroslaw Kaczynski said Saturday his governing Law and Justice party will push for early elections to end the strife within his struggling coalition. 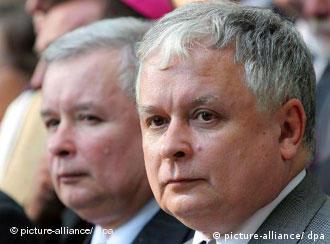 The conservative Kaczynski brothers are watching their coalition crumble

Poland's conservative Prime Minister Jaroslaw Kaczynski is to sack the ministers of his two junior coalition partners, the leader of one of them said Saturday, making early snap general elections more likely.

The prime minister himself later confirmed that his governing party could no longer govern either with his junior partners, nor without them.

"I see no possibility of supporting a minority government, and we don't want to have the kind of government we have had recently," he said at a press conference. He hinted at the dismissal of two cabinet members, but gave no details.

The EU's biggest former communist country has been in political turmoil for months and speculation has been rife that Kaczynski would end up calling for elections to be held two years early.

Speaking after earlier talks with Kaczynski, the head of the radical League of Polish Families (LPR), Roman Giertych, had told journalists on Saturday that "the prime minister told me that he was breaking the coalition with the LPR and that LPR ministers would be dismissed on Monday."

The ministers of the populist Sambroona party, which has already announced it is quitting the government, would also be fired, Giertych added.

Bitter infighting has sparked a political crisis within the coalition headed by Kaczynski's Law and Justice (PiS) party.

The prime minister's twin brother, President Lech Kaczynski, and opposition leader Donald Tusk agreed on Thursday that it was "inevitable" that elections scheduled for 2009 would have to be brought forward, most probably to October.

It was time to end the "mounting chaos," Tusk said. 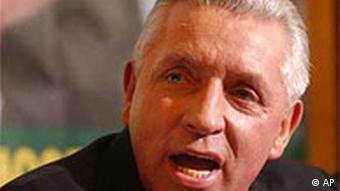 The PiS leadership meeting Saturday was expected to make a decision on calling early polls, which Kaczynski has more than once brandished as a threat to bring his coalition partners into line.

The two junior parties are uncertain of receiving more than five percent of the vote -- the hurdle required for seats in parliament -- and are therefore wary of an early ballot.

But such a move would also spell problems for the PiS, which according to opinion polls only has some 23 percent support, compared with 33 percent for Tusk's Civic Platform.

Adam Lipinski, the deputy PiS leader, said Friday that he did not envisage a future coalition with Tusk's party, which was narrowly defeated in the 2005 elections.

The existing coalition first fell apart last September when Kaczynski fired Andrzej Lepper, the deputy premier and leader of Samoobrona, amid a budget and defence policy dispute. He was forced to take Lepper back three weeks later to stave off early elections, in the face of poor poll ratings.

The latest crisis erupted in early July, when the premier again sacked Lepper over corruption allegations, and Samoobrona said it was leaving the coalition. 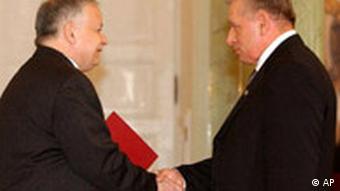 Lepper denies the charges against him, and has threatened to level unspecified allegations of wrongdoing against the prime minister.

In the current parliament, the PiS has 150 seats, Tusk's party 131 and the Social Democrats have 55.

Since coming to power in 2005, the government under the Kaczynski brothers has presided over healthy economic growth, but has had to frequently navigate choppy political waters and has had serious disagreements with its European neighbors.

Poland Agrees to EU Declaration and to Talks on Constitution

Polish President Kaczynski told German Chancellor Merkel on Saturday his country would not block efforts to revive the European Union's constitution and would sign an EU declaration marking the bloc's 50th birthday. (17.03.2007)

Tensions between Germany and Poland haven't ceased since Jaroslaw Kaczynski became prime minister in July. He and Merkel reaffirmed their friendship over the weekend -- but how long will the peace last? (12.09.2006)