Polish Premier Incited by Köhler′s Speech to German Expellees | Europe | News and current affairs from around the continent | DW | 04.09.2006

A conciliatory speech by German President Horst Köhler during the annual remembrance day for expellees has irked Poland's new premier. Others in the country welcomed the German head of state's remarks. Köhler: "The expellees' culture and history is part of German identity"

Poland's conservative premier, Jaroslaw Kaczynski, criticized Köhler's appearance at the annual remembrance day for the 12 million Germans who fled or were expelled from Eastern Europe after World War II.

He called Köhler's speech "one of these unsettling events that have taken place recently in Germany."

Speaking to some 2,000 guests of the League of German Expellees, Köhler made an appeal for increased dialogue within a greater European context. He recognized the concerns that have sprung up in Poland, particularly following the opening of a controversial exhibit on German and other expellees in Berlin in early August.

"We shouldn't ignore these concerns," he said. "We should take them seriously, even if we consider them unfounded. There is no doubt what the cause of escape and expulsion was: The unjust national-socialist regime and World War II, which Germany started." 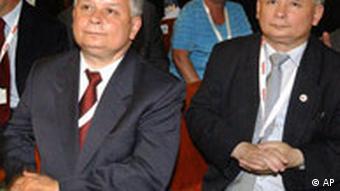 The League of German Expellees, chaired by Erika Steinbach from the conservative party CDU, has celebrated "Home Day" since 1950. The event recalls the fate of Germans who fled from the Soviet army when World War II ended, or were expelled from former German territories when Europe's borders were redrawn following the war.

Kaczynski was referring to the League when he said, "There is a large government-supported group in Germany that constantly brings up the Polish territories that used to belong to Germany."

If there were a similar organization in Poland that demanded the return of parts of the Ukraine, Belarus or Lithuania, Warsaw would face serious political consequences, added Kaczynski.

"We just want the principle of symmetry to be applied here so that everyone is treated the same," he said.

Köhler said that Germany's former territories to the east were part of his country's cultural heritage, even if irrevocably no longer part of Germany and that the culture and history of the expellees was part of German identity.

Kaczynski's opinion not the only one in Poland

According to a Monday article in the Warsaw daily Gazeta Wyborcza, Kaczynski's statements may not be representative of the Polish media or his country's population. 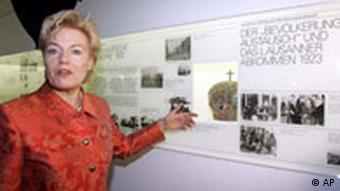 Erika Steinbach has advocated for a permanent expellee center in Berlin

Köhler's words "were positive, from the Polish perspective," wrote the paper, because "he began with Sept. 1, 1939 as the beginning of the expulsions. Secondly, he emphasized the integration of the expellees and not remembrance of German suffering."

Köhler also mentioned the Danzig Declaration, signed in October 2003 by his predecessor Johannes Rau and Poland's former president Aleksander Kwasniewski. The document represents a formal withdrawal of compensation claims and mutual accusations of guilt between the neighboring countries.

A summer of tension

Communication between Polish and German government leaders has been taut this summer and emotions have run high after a series of toe-stepping events.

The string of offending incidents include a satire in a German newspaper that called Polish President Lech Kaczynski "a potato," the Berlin exhibition on expulsion, and Günter Grass' public confession of membership in the feared Nazi Waffen SS.

From the "potato" satire to Günter Grass' confession, politicians and newspapers in Germany and Poland have had plenty of tomatoes to throw in the past few weeks. DW-WORLD.DE takes a closer look at the ramifications. (Aug. 24, 2006)

A controversial exhibition which opened in Berlin Thursday on the expulsions of Germans and other Europeans after 1945 has been strongly condemned by Polish leaders. (Aug. 11, 2006)