Polish novelist Olga Tokarczuk and her translator Jennifer Croft have won the Man Booker International Prize for fiction. "Flights," a novel about journeys in time, space and human anatomy, was praised for its wit. 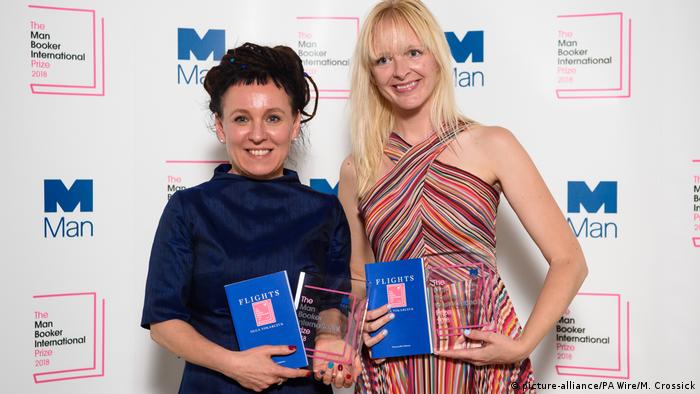 An English translation of the Polish novel "Flights," which combines tales about travel with explorations of the human body, was named as the winner of the prestigious Man Booker International Prize on Tuesday.

Tokarczuk's novel, first published in 2007 and translated into English by Jennifer Croft, won the £50,000 (€57,000, $67,000) prize after finishing as the judges' favorite from a shortlist of six. The cash prize will be split between the author and translator.

"Tokarczuk is a writer of wonderful wit, imagination and literary panache," said head judge Lisa Appignanesi, adding, "I think picking up 'Flights' will be an experience for anyone."

The Man Booker International Prize, a parallel to the traditional Man Booker Prize, started in 2005 as an award for the combined works of foreign-language authors. Since 2016, it has rewarded an English-language translation of a single work of international literature.

Tokarczuk, 56, is one of Poland's most celebrated novelists and has won multiple national and foreign literary prizes, including twice winning the Nike Literary Award, Poland's most prestigious prize.

Her first book, "The Journey of the People of the Book," was published in 1993. Since then, her bestselling books have been translated into more than 25 languages.

She most recently co-wrote the screenplay for "Spoor," a Polish crime film that won the Alfred Bauer Prize at the 2017 Berlin film festival and was nominated as Poland's entry for the award for best foreign language film at the 2018 Oscars.

Tokarczuk has more recently made headlines for her criticism of Poland's right-wing government and the country's anti-Semitic history, garnering her death threats and animosity among nationalists and conservatives.

Read more: Korea's Kafka? Man Booker winner Han Kang on why she turns a woman into a plant