Egyptian police have stopped dissidents from storming a court and the prosecutor-general's office in central Cairo. Violence between Christians and Muslims in Egypt has also left five people dead, security officials say. 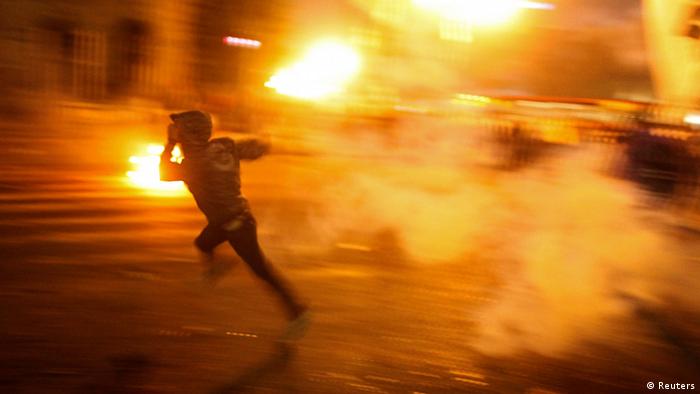 Security forces in Cairo used tear gas to prevent protesters from reaching a Cairo court and the office of the prosecutor-general on Saturday, according to witness reports. State news agency MENA also noted a major protest in al-Fayoum, to the south of Cairo. The government agency reported that eight people were injured and seven taken to hospital, citing the Health Ministry.

Nationwide protests were slated, and in Cairo on Saturday some 500 people marched through the city center, chanting "The people want to topple the regime" on the fifth anniversary of the founding of the opposition April 6 youth movement, which began when Egypt was ruled by ousted President Hosni Mubarak.

Egypt has seen political turmoil since Mubarak's overthrow in 2011, with the current president, Mohamed Morsi, and his Islamist allies fending off political attacks from various secular opposition groups. Just last week, the prosecutor-general had angered activists by taking a popular TV satirist accused of insulting Morsi in for questioning. The government denies any crackdown on dissent.

The newly published proceedings of the international Media Dialogue 2012 include an essay by Eira Martens on the role of social media during the Egyptian revolution. Martens is a graduate of the IMS program. (02.04.2013)

Separately, fighting erupted Saturday when a street quarrel escalated into a gun battle with assault rifles. Four Christians and one Muslim died in the violence in the city of Shubra el-Kheima, just north of Cairo, officials said. Several others were reported to have been injured.

Police said the fighting began after young Muslims spray-painted an Islamic institute with inflammatory symbols, leading to a quarrel among onlookers that quickly escalated.

MENA quoted a Christian official as saying that assailants had also attacked a local church, setting parts of the building on fire. A Christian home and a pharmacy were also set on fire, police said.

The town was said to be quiet later in the day, with police patrolling the streets and some 15 people having been detained. Investigators said they were still awaiting an autopsy for the exact caused of death of the five men.