The deadly shooting sparked protests, as demonstrators demanded the killer be handed over. Authorities claim the suspect is in custody and the case referred to a prosecutor - but Egyptians doubt justice will be served. 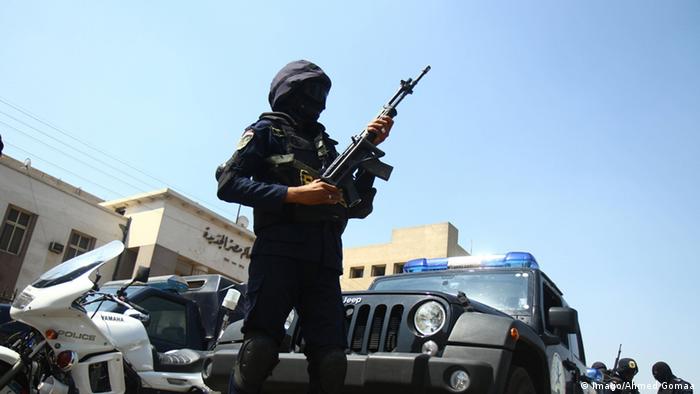 Angry mobs turned over a police car and attacked a police officer in Cairo after another officer fatally shot a street vendor in a dispute over the price of a cup of tea.

The officer opened fire with an assault rifle, shooting the vendor in the heart and injuring two others.

One video of the mob, estimated at about 200 people, showed the crowd chanting: "The Interior Ministry are thugs."

The ministry has acknowledged the shootings and the officer's argument with a vendor over "the price of a drink."

One witness who video-taped the situation, described the unfolding scene to news agency Reuters, but declined to give his name for fear of reprisal.

"There are clashes between the police and locals," he said. "Security forces brought in two riot police vehicles and an armored truck and the victim's family is here and pelting them with rocks."

Brig. Gen. Hesham Amer, police chief of the New Cairo district, said the policeman was arrested, and referred to the prosecutors. But the unnamed witness said the mob was not satisfied: "security forces are retreating and promising justice but the crowd is demanding police hand over the killer."

Today's shooting is the latest in a series of violent assaults perpetrated by police officers.

In February, an officer shot and killed a driver in the street over an argument about a fare. That incident sparked protests outside Cairo's security directorate. President Abdel-Fattah el-Sissi has proposed legal changes to toughen punishments for police abuses.

In November, riots broke out in at least two other cities after three people died in police custody in the space of a week.

The killing of Italian researcher Giulio Regeni in Cairo earlier this year has also led the finger of blame to point towards Egypt's security forces. Authorities deny having anything to do with Regeni's death, although his body was badly beaten and human rights experts say his injuries were consistent with Egyptian torture practices.

Officials have dismissed the other cases of police violence by calling them "isolated incidents."