Two cargo ships collided in the Baltic Sea off the coast of the Swedish city of Ystad and the Danish island Bornholm. One vessel capsized, with a crew member found dead and the other missing. Police have made 2 arrests. 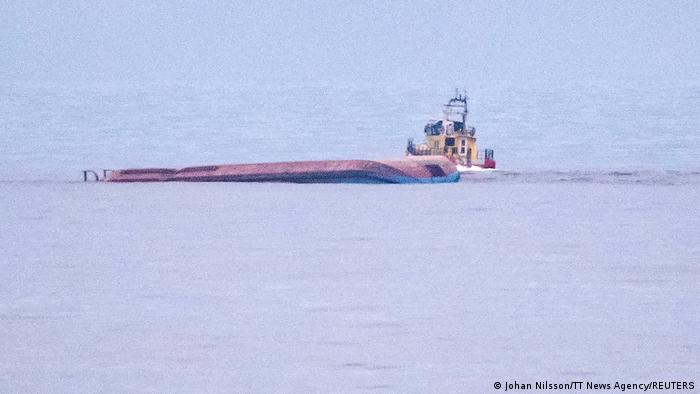 The Danish cargo ship Karin Hoej capsized after colliding with British cargo ship Scot Carrier, between Ystad and Bornholm, on the Baltic Sea

Two cargo ships collided, resulting in at least one death, on Monday between the southern Swedish city of Ystad and the Danish island of Bornholm.

Swedish authorities said two crew members from the British vessel Scot Carrier were being held by police as part of a criminal investigation.

An initial probe into negligence was confirmed to have been widened on Monday afternoon.

The country's prosecution service said an investigation into "aggravated drunkenness at sea," "gross negligence in sea traffic," and "gross causing of death by negligence" had been opened.

Two Danish crew members aboard the smaller boat were initially reported to be missing after the incident, which occurred in Swedish territorial waters. The Swedish Maritime Administration later said in a statement one crew member had been found dead after a search of the vessel, which was towed closer to the coast.

Authorities identified the smaller vessel as the Danish-flagged Karin Hoej.

What happened to the ships?

The 55-meter Karin Hoej capsized after the collision and towed towards shore as part of the rescue effort. The 90-meter British-registered Scot Carrier was said not to be in distress and to have helped with the initial search.

The maritime administration said it received a pre-dawn alarm that the ships had collided.

The Scot Carrier had been traveling to Montrose in Scotland from Salacgriva, Latvia. The Karin Hoej was en route to Nykobing Falster in southern Denmark from Sodertalje in Sweden at the time of the accident.

By mid-Monday, Swedish tabloid Expressen reported the search was called off as water temperatures were too cold to survive in.

The water where the crash occurred is around four to six degrees Centigrade (39 to 43 degrees Fahrenheit), according to the Danish Meteorological Institute.

Between the North and the Baltic Sea