Police in Berlin ask for help as arson attacks on cars continue | Germany| News and in-depth reporting from Berlin and beyond | DW | 18.08.2011

Police in Berlin have requested federal assistance after unknown vandals torched more vehicles for a third consecutive night in the German capital, in what the authorities say may be politically motivated attacks. 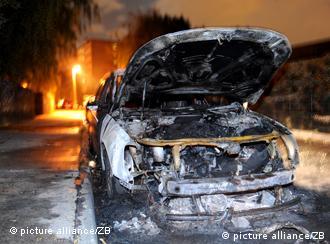 Cars in Berlin were torched for a third consecutive night

Another six cars have been torched in the latest in a series of deliberate arson attacks in Berlin, prompting local police on Thursday to ask the federal government and other states for assistance in finding the culprits.

Wednesday's attacks come after a series of car fires Tuesday night, when 17 vehicles were damaged, and after 11 cars were set alight the day before.

Police, who believe the vandalism may be politically motivated, are continuing the hunt for an individual or group of unknown offenders who are believed to be anarchists or left-wing extremists.

A spokesman for the police union (GdP) said Thursday that federal police and officers from other states should be dispatched to the capital for "at least six months" to provide support to the local police.

"The assistance is necessary because the Berlin government in the last 10 years has cut 4,000 police from its staff," GdP spokesman Michael Purper told the Berliner Morgenpost newspaper.

More than 130 vehicles have been torched in the German capital so far this year - more than twice the number in all of 2010.

Wednesday's night's arson attacks targeted cars in the Charlottenburg and Tiergarten neighborhoods but have occurred in a number of others areas of the city in the past three nights. No injuries were reported in any of the incidents.

Police and firefighters were first called to a truck fire in the district of Spandau on Tuesday evening before tackling the sequence of fires in the early hours of Wednesday morning.

On the first night of fires, Berlin's respectable Charlottenburg district was the main target. On Monday night, 11 cars were set alight in the area. A week earlier more than a dozen cars were damaged or destroyed in similar attacks.

Police have struggled to indentify the arsonists, believing the fires to be part of a growing trend rather than the actions of an individual. They have posted a reward of 5,000 euros ($7,200) for information leading to the arrest of the culprits.

During an afternoon walk in a park, a man in Berlin was injured when a plastic bag he picked up exploded. Police have cordoned off the area but found no evidence of other explosives. (14.08.2011)

A man suspected of being behind a recent string of arson attacks on cars in Berlin has been detained by police. The city has been hit by dozens of vehicle burnings, usually targeting high-end cars. (13.06.2011)

Arsonists have attacked government and police buildings in Berlin and Hamburg. The government had voted to extend the deployment of 4,500 German soldiers in Afghanistan by one year. (04.12.2009)