A demonstration organized by labor unions to protest economic policies turned violent in Brussels. The unions and their supporters accuse the rightist government of attacking workers' rights. 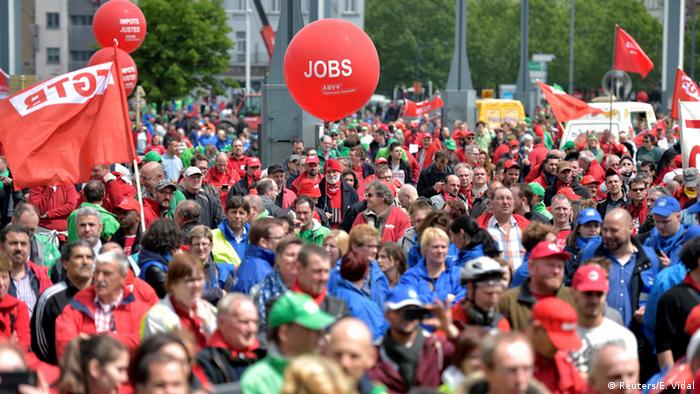 As many as 60,000 protesters turned out in Brussels for the protest on Tuesday. All but a hundred or so of them demonstrated peacefully. Near the end of the rally dozens of masked protesters began throwing stones, firecrackers and other objects at police, and scuffles broke out among the protesters. 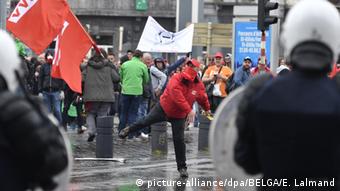 "I am here to protest against all the measures that this right-wing government is taking. They are attacking workers, pensioners and the unemployed," Michel Beis, a trade union member, said during the rally.

"We are going backwards," added Jacques Warnier, a protester from the town of Liege.

Unions have said the belt-tightening policies of Liberal Prime Minister Charles Michel over the past two years have cost an average family some 1,200 euros ($1,350) a year. In addition, they say the government's promise of additional jobs has not materialized.

Union leaders say the budget difficulties would be addressed best by cracking down on tax evasion.

The plan would allow employers to have workers clock up to 45 hours a week, if necessary, but that it would be followed by shorter weeks in order to retain the 38-hour work week principle.

Critics also accuse the government of demanding longer working careers before pensions kick in, and less pay under tougher conditions.

Former socialist prime minister Elio di Rupo was among the protesters who wore red, green and blue tops in the colors of the main unions from both Dutch-speaking Flanders and French-speaking Wallonia.

The capital remains under a state of heightened security in the aftermath of March's deadly suicide bombings at the airport and metro system.