The "Syndikat" bar has become a center of a major anti-gentrification campaign. Demonstrators set fires and set up barricades in front of the bar to stop bailiffs from entering on Friday morning. 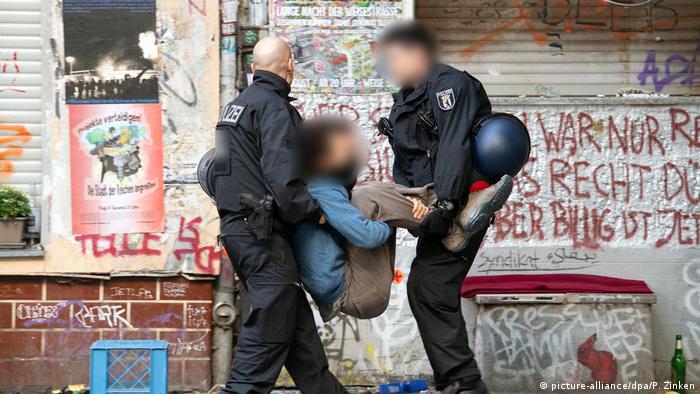 German police arrested 44 demonstrators who were protesting the eviction of a left-wing bar in Berlin that has become a center of an anti-gentrification campaign.

Hundreds of officers faced off on Friday against the demonstrators, who erected barricades and set several fires in front of the establishment in a bid to stop bailiffs from entering the Syndikat bar in the capital's Neukölln district.

Neukölln, the neighborhood where Syndikat is located, was initially a working-class neighborhood, but rents have been on the rise due to an influx of professionals and international students, who often pay higher rent prices than locals.

The 35-year-old bar has become a symbol in recent years for activists who say that rents in Berlin are becoming unaffordable. Neighbors living next to the bar stood on balconies banging on pots and pans in solidarity, and Friday's protests remained largely peaceful.

According to a police statement, six officers were injured in the standoff.

Berlin's state government recently ordered a five-year rent freeze on 1.5 million apartments, while campaigners have been calling on the state to buy properties owned by wealthy landlords.

Read more: Amid coronavirus, Berlin's tango scene struggles to stay on its feet

The bar is operated by a collective, but the property that the bar is located in belongs to a company linked to London-based real estate Mark Pears.