Police Arrest 15 Protestors in Clashes Over Berlin Mosque | Germany | News and in-depth reporting from Berlin and beyond | DW | 12.07.2007

German police have arrested 15 far-right extremists and five counter-protestors in the latest round of clashes over the controversial construction of the first mosque in the former East Berlin. 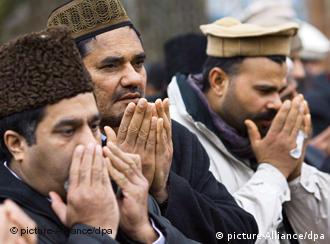 The Ahmadiyya Muslim community is facing opposition in the German capital

Some 340 police were deployed to deal with almost 600 demonstrators taking part in a protest on Wednesday night against the planned Ahmadiyya mosque in the Pankow-Heinersdorf neighborhood.

It ended in violent clashes between police, protestors and counter-protestors, police said on Thursday.

Officers said that the troublemakers, believed to be far-right extremists, now face charges of assault, disturbing the peace and resisting the police.

A point of contention 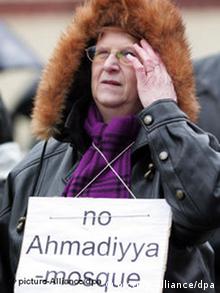 Residents of Pankow-Heinersdorf say they don't want the peace disturbed

This was not the first rally against the mosque, which has been dividing locals ever since plans for the new building became public.

The local council in Pankow-Heinersdorf -- home to the East German politburo elite in the days of the Cold War -- has been receiving ongoing complaints about the mosque as well as threats to burn it down.

Although the debate has been hijacked by the far-right, the main objections come from residents who insist their opposition is not ideological. They say they oppose the mosque purely on the grounds that there are no Muslims in the neighborhood and therefore no need for a mosque. Others say they fear an "Islamization" of the area, and that the new building will turn a quiet part of Berlin into a racial trouble-spot.

Muslim authorities argue that the mosque near the city's Tegel airport had become too crowded and that land in Pankow-Heinersdorf, which used to belong to the communist East German state, was cheap.

Mosques are common in western Berlin with its large Turkish community, but this is the first to go up in the east of the city.

The mosque is due to open in August 2008 in a former mustard factory in the Tinius Strasse to the 250 members of Berlin's Ahmadiyya community, which is categorized by German authorities as tolerant and open-minded.

But German authorities are concerned it will trigger a rise in right-wing extremism, particularly in the economically depressed east of the country where the ultra-right National Democratic Party has gained support in recent elections.

A German book author said he wants to read aloud inside a Cologne mosque from "The Satanic Verses," the 1988 novel by Salman Rushdie that some Muslims consider blasphemous and led to a 1989 fatwa against Rushdie. (12.07.2007)