Pole dancing: 'Not something dirty, but a competitive sport'

Pole dancing is often associated with sex, stripping, night clubs and erotica, but it is an internationally recognized competitive sport. German pole dancer Nick Krämer is fighting for more respect and recognition.

Nick Krämer has been devoting all his free time to pole dancing for almost seven years. For him, the sport is fulfilling.

"What I love most about the sport is that it's so flexible. There are no limits to what I can do, and I'm always free to develop and invent myself," he told DW.

"My typical workout routine is actually crazy, which most people don't believe."

Krämer said he starts with coordination and conditioning before working on his flexibility, stretching for an hour or more. "Only when I'm really warm and stretched out do I go to the poles, otherwise the risk of injury is just too high."

He was very active even before he started pole dancing, playing football and doing other forms of dance. But he quickly realized that these sports were not right for him.

"It was so regimented," Krämer said. "There was absolutely no freedom."

But pole dancing is different, according to him. "There are also rules, but the sport allows you the freedom to let your creativity run wild," he explained.

Although Krämer is very outspoken about his sport and is almost always willing to answer questions, he regularly faces hateful comments. The remarks either attack him personally because he is a man doing the sport or question the sport, which is even described as disgusting.

"All this has happened before, but it always affects me because I have yet to develop a thick skin and just let (the comments) bounce off me," Krämer admitted.

For him, it is particularly hurtful that many people categorize pole dancing as erotica. These people, he said, often associate the performance art with lightly dressed women dancing lasciviously in a night club. Such clubs, which have existed for decades, have shaped this image, but they also have little to do with the sport of pole dancing.

The sport originates from traditional Asian acrobatics, which was practiced only by men. In the circus, the pole artists then performed acrobatic poses and swings on vertical poles.

Not only men like Krämer face hostility in the sport, but women, too. "They deal with this sexualized stereotype, which causes some to hide hide their sport," he explained.

Today, pole dancing is an internationally recognized, competitive sport that stands for strength, endurance, fitness and creativity. The sport has two disciplines: the static pole and the spinning pole.

Depending on the nature of the pole, the dance consists of a variety of lifting and swinging movements and acrobatic figures.

Top pole dancers regularly compete in international competitions, which are co-sponsored by the International Pole Sport Federation (IPSF). The sport has even been considered as an Olympic sport. 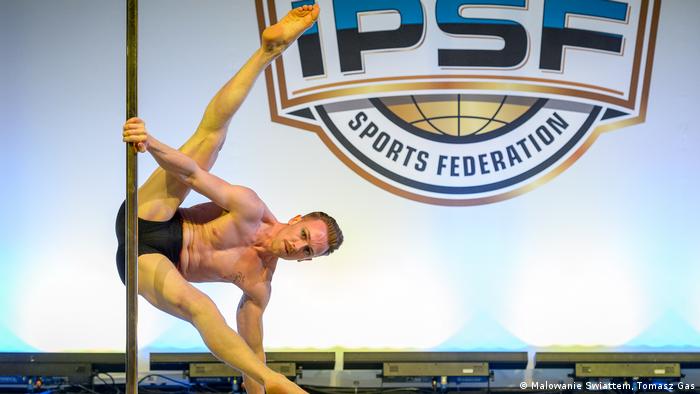 Krämer has participated in the 2018 World Championships and was more than satisfied with is performance.

"I finished in 13th place out of 28," he recalled. "That might not sound very high now, but I was very satisfied because I delivered a great routine."

How pole dancing is changing fitness

Teaching pole dancing is another way Krämer is trying to rid stereotypes from the sport. Pole dancing, he said, is suitable for everyone, no matter what age, weight or body shape.

"I teach kids, teens, adults, and I also have people over 50 in my classes. They all don't just want to go to the gym — they want to try a new sport," he explained.

For his day job, Krämer works as a teacher at the Kopernikus High School in Bonn, a city in western Germany. He teaches sports, art and history.

"It was especially important for me to need to hide my sport from my colleagues and students," he said.

Some didn't know that pole dancing was a sport, possessing the sexualized stereotypes in their minds. But they all reactived positively when Krämer told them it was a competitive sport. One of his colleagues even knew him through pole dancing — she had taken a lesson from him.

Krämer simply wishes that people "put aside their preconceptions of the sport, give it a chance, and try it. Maybe they'll end up being as excited about it as I am!"

The Paralympics in Tokyo were his last Games as a competitive athlete. Having hung up his blades, David Behre has returned to his everyday profession, but his vocation remains to help and give hope to amputees.

Multisport athletes who compete at both Summer and Winter Olympics face a new challenge. Due to the one-year delay of Tokyo 2020, they have only a few months to prepare for the upcoming Beijing Winter Games.