Jaroslaw Kaczynski, Poland's former prime minister and the country's most powerful politician, was spotted reading a cat book during a session of parliament. Critics have called the action a publicity stunt. 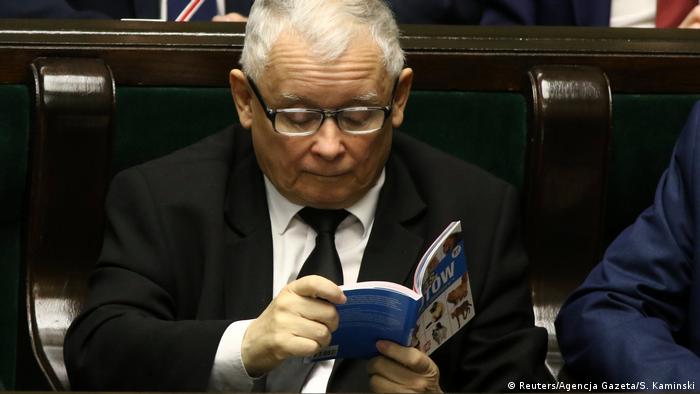 In the early part of a Friday session of parliament, Jaroslaw Kaczynski (pictured above), the leader of the ruling Law and Justice party in Poland, openly read a small handbook called "Atlas of Cats: Wild and Domestic."

Law and Justice spokesman Beata Mazurek tweeted a picture of Kaczynski fully engrossed in his book with the remark: "May the pre-holiday reading of chairman Jaroslaw Kaczynski encourage us to support animal shelters and the people who help animals."

A large part of the legislative session on Friday was to discuss the changes to the country's justice system, which include a set of controversial proposals that would give the Law and Justice party more influence over the Supreme Court, a move that could limit the independence of the judiciary. Parliament is expected to vote on the judicial overhaul in the coming weeks.

- What are Poland's judicial reforms proposed?

The image of Kaczynski reading a cat book sparked a few comical memes, but it also courted accusations that the former Polish prime minister was trying to distract voters from the controversial judicial overhaul.

Michal Szczerba, a member of the opposition Civic Platform party, tweeted a screen shot of Beata Mazurek's tweet and accused Poland's ruling party of softening Kaczynski's image as "democracy is collapsing" in the country.

"Let us not be fooled," Szczerba wrote.

Kaczynski, 68, is a renowned cat lover and has owned several over the years. That trait has often softened his image as he is otherwise seen as an unrelenting politician.

Polish media have also pointed out the irony of his Friday reading choice: the book was published by Ringier Axel Springer, a German-Swiss publisher which has a strong presence in the Polish market. Kaczynski has called for a law that would limit foreign ownership in the media sector.