Exit polls show the opposition Law and Justice (PiS) party leading with 37.7 percent of votes. If confirmed, that result would make PiS the first single party to secure a majority in a democratic election in Poland. 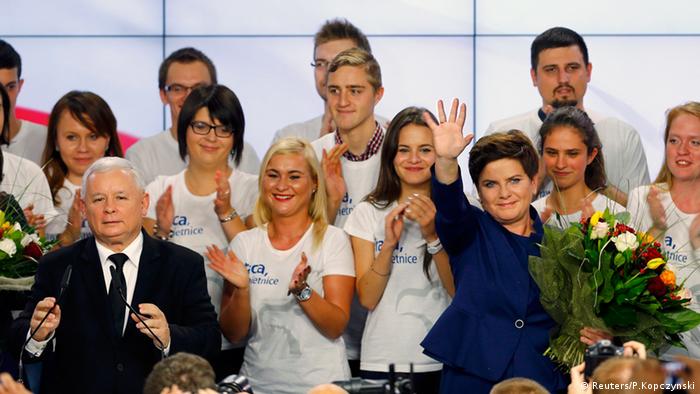 The conservative Law and Justice Party (PiS) has won Sunday's parliamentary elections in Poland with 37.7 percent of the vote, giving the party enough to form a government without a coalition, according to exit polls.

Led by eurosceptic Jaroslaw Kaczynski, the party will pick up 232 out of 460 seats in the lower house, compared to incumbent Prime Minister Ewa Kopacz's Civic Platform's showing of 23.6 percent, or 137 seats, the polls indicated.

The exit polls showed only three other parties making it into parliament, one led by rock star Pawel Kukiz, a new pro-business party Modern Poland and the Polish Peasants Party. Leftist parties were voted out of parliament for the first time since the collapse of communism in 1989.

The results come despite eight years of economic growth and political stability under the centrist and pro-market Civic Platform. The party helped Poland through the 2008 financial crisis with positive growth and the 2010 plane crash that killed President Lech Kaczynski, Jaroslaw's brother. 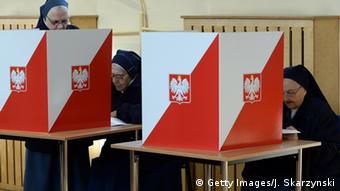 "We didn't waste the last eight years," Kopacz told Civic Platform supporters, conceding election defeat. "Poland is a country that has made economic progress, unemployment is down to single-digits. This is the Poland we leave to the election winners."

Official results are expected on Monday.

The PiS, if the results are confirmed, would be the first party to rule Poland since the end of communism with an absolute majority in parliament. Critics of the PiS worry their rule could destabilize the country's currently stable finances and usher in a period of political instability.

Former premier Kaczynski, who didn't run even though he heads the party, chose Beata Szydlo, 52, to be the PiS's choice for prime minister earlier this year. She helped run a campaign that made a relatively unknown figure, Andrzej Duda, president.

That choice prompted concern Szydlo would be the public face for Kaczynski, a controversial figure whose term as prime minister was marked by domestic political turmoil and tense international relations. In response, Szydlo has claimed she is independent and has her own ideas.

Szydlo and Kaczynski ran the campaign on bread-and-butter issues and simmering fears in conservative, Catholic Poland over the largest migrant crisis to hit Europe since World War II.

Kaczynski stoked nationalist concerns over refugees during the campaign, claiming migrants could bring disease and disrupt the social fabric of Poland. His view is that Poland should provide financial help to the EU to deal with refugees but not accept any, a policy that polls show is supported by 60 percent of Poles.

PiS opposes adopting the euro currency and is strongly pro-NATO. But its anti-immigration stance is expected to have an impact on the EU's immigration policy - possibly putting Poland at loggerheads with Germany, the economic powerhouse of Europe expecting up to a million refugees this year.

Poles vote in election expected to shift parliament to the right

Voters in Poland have been casting their ballots in an election that many predict will change the balance of power. Campaigns were dominated by the refugee crisis, as well as economic and social issues. (25.10.2015)

Poland's young voters are disillusioned with the ruling pro-European liberals. That's the main reason why the liberals are likely to be unseated by the conservatives. Rafal Kiepuszewski reports from Warsaw. (22.10.2015)