In Poland, rescue workers and citizens are scrambling to slow the rising tide of flood waters that have already killed 15 people. In Germany, authorities in Brandenburg are preparing for flooding along the Oder River. 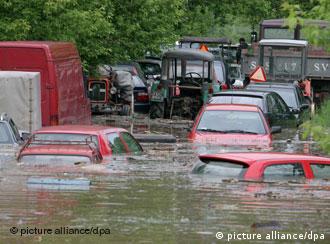 Evacuation is underway in the flood-hit village of Sandomierz, Poland

Flooding in Poland has now killed at least 15 people and continues to wreak havoc as the river running through the capital burst through the riverbank on Monday.

The Vistula River spewed over the riverbanks in a non-residential area of Warsaw, flooding 18 Polish communities about 100 kilometers northwest of the Polish capital. Emergency workers and residents erected sandbags and deposited debris to try to stop the flow of water. 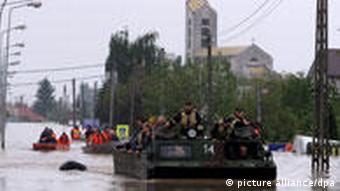 An area of 8,000 hectares was underwater, according to the PAP news agency, forcing the evacuation of 4,000 people and 5,000 animals.

In the worst case scenario, the residents of neighboring Gabin and Slubice - about 10,000 people - would have to be evacuated.

In Plock, a city in central Poland, water began seeping through some 50 meters of a flood barrier, forcing the evacuation of 160 residents. The nearby village of Swiniary was flooded, with water rising nearly to the rooftops, according to a report from broadcaster TVN 24. 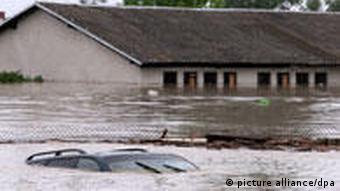 Germany is making emergency preparations for flooding as well

City officials have alerted those in high-risk areas that they should be ready to evacuate at a moment's notice; however, many people want to remain in their homes as long as possible, fearing robbers.

Schools near the flooding area were closed on Monday as a precaution.

In Germany, too, the water of the Oder River rose by 20 centimeters (7.8 inches) in a single day. The level Monday morning was 15 centimeters above the target for a level one alert, the most moderate of four alert levels. The state of Brandenburg is preparing for the first flood wave, which is expected to hit Germany on Wednesday or Thursday.

Flooding in Poland continued over the weekend with the death toll rising to 12. Water levels also rose in Brandenburg, although authorities do not expect the worst to arrive until next week. (22.05.2010)

Central and Eastern European countries were struggling Wednesday to cope with floodwaters swamping a host of towns and rivers. In Poland, high waters claimed a sixth life as parts of Krakow were overwhelmed. (19.05.2010)

Learning from the 1000 year flood

Parts of Germany's east were hit by heavy flooding in 2002. Many lost their homes, the cost of the destruction reached billions. But just what is the true cost of natural disasters? Researchers in Leipzig find out. (25.08.2009)