Poetry has mostly been regarded as something for literature connoisseurs. But it's always been a different story in Eastern Europe. There, people celebrate their poets like pop stars. 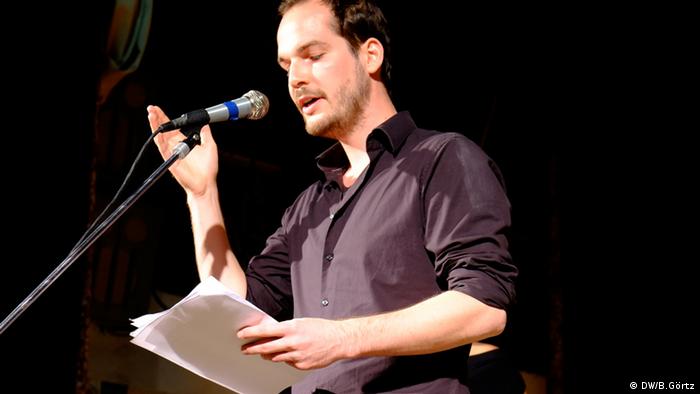 "I'm a pop star here," 26-year old poet Max Czollek said, referring to the Ukrainian town of Chernivtsi, close to the Romanian border. The young man from Berlin spent two months in the town on an international scholarship for poets. Lyric aficionados know Chernivtsi as the birthplace of German-language poets such as Paul Celan and Rose Ausländer.

"Poetry is something that's much more celebrated here. The audience is quite young," German poet Czollek said. He's here on behalf of the initiators of the 4th International Poetry Festival Meridian Czernowitz, which took place in September. Spending time in Ukraine taught Czollek a lot about how Germans and Ukrainians differ in their approach to poetry.

Whether they are young or old, Ukrainian poetry fans all know the names of the country's renowned poets such as Yuri Andrukhovych and Serhiy Zhadan, or upcoming poets like Andrij Ljubka.

"If I mention 'I'm doing something with Ljubka' even people who are not involved with literature at all say 'Wow, Andrij Ljubka, that's great!' That would never happen in Germany," Czollek said.

There is a different kind of appreciation for poets in the Ukraine, says Danish artist Nielsen. "Poets here are still worshipped. In Germany, that might happen to Hölderlin or Celan, but poets who are still alive are only a small part of the literature crowd." 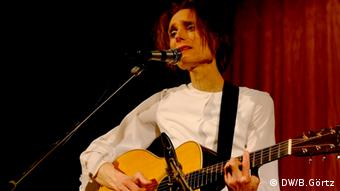 Nielsen takes on a female role when performing

When on stage, Nielsen takes on a female identity, playing the guitar and performing political satirical songs with a high-pitched voice. The audience appreciates his message and celebrates Nielsen frenetically. "When I'm performing here, there are always five TV stations taping the sessions. That's something you don't experience in Bremen, Berlin or Copenhagen. Not even in Paris."

German poet Czollek also appreciates the fact that the Ukrainian media is much more interested in his work, compared to German media stations. "I'm mostly interviewed by TV journalists; not so much by newspapers. In Berlin you have to bend over backwards to make TV reporters show up."

Poets in Ukraine have a very different standing in society compared to in Western countries. They are considered to be the intellectual voice of society.

"In the eyes of the people here poets are the ones one expects something very essential, very important from," the renowned poet Andrukhovych said. Many of his works - poetry as well as prose - have been translated into German as well. "In Germany poetry is quite diverse, very clever - at the same time, it doesn't have such a broad and huge audience compared to the Ukraine."

Every seat was taken during Andrukhovych's performance at the lyric festival. About a thousand people listened to poetry from midnight until 4am. Poets don't just recite their poems, they perform, they celebrate, they act. Zhadan, a sort of lyrical punk rocker, made people start up from their chairs right at the beginning.

Even though feedback and audiences differ from East to West, the topics are similar, ranging from interpersonal matters such as love and hate to politics, exclusion and violence. It's the way the poets approach the topics that differs. 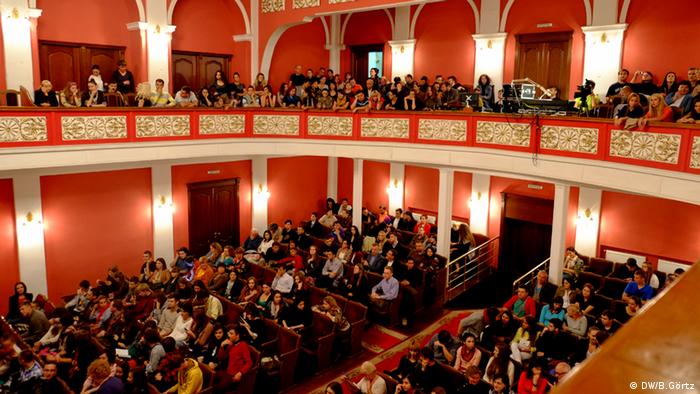 "If I look at Zhadan, Ljubka or Andrukhovych, then that's poems with a lot of drastic energy; poems that are very expressive. German lyric is rarely expressive," Czollek said. "In Germany, it's usually the sort of reading with a glass of water next to the poet. We sit down, open up our book and read."

In Ukraine, lyric is presented in a very different way. Artist Nielsen enjoys how passionate the audience can get about things they enjoy. "That's undisguised passion," he said. Unfortunately, this wouldn't be the case at festivals in Western Europe, the United States or other countries he has visited. "That's where it's supposed to be cool and blasé. Even though the festivals are called 'utopia' or 'manifesto' - it still is about self-marketing, about career."

Now and then though, Nielsen thinks the worshipping of poets goes a bit too far in Eastern Europe. "On the other hand, it's nice that the word is considered sacred."

Today, Chernivtsi is a province outside of EU borders and outside of memory. Jewish artists who wrote poems and sang in their native German have passed away. But their legacy is more alive than ever. (30.11.2012)

Ten years after the "Orange Revolution" Ukraine appears to be leaving that path to democracy and returning to its Soviet past. Can its course be changed? (08.05.2013)

May 3 is World Press Freedom Day. Well-known Ukrainian journalist Mustafa Nayem talks with DW about the difficult working conditions for the press in his country. (03.05.2013)