Plot to sideline Corbyn deepens divide in Labour Party | Europe| News and current affairs from around the continent | DW | 10.07.2016

A plan to topple Labour leader Jeremy Corbyn appears set to plunge the party into a political civil war after UK voters opted for Brexit. Recriminations have mounted amid warnings that the party's existence is at stake. 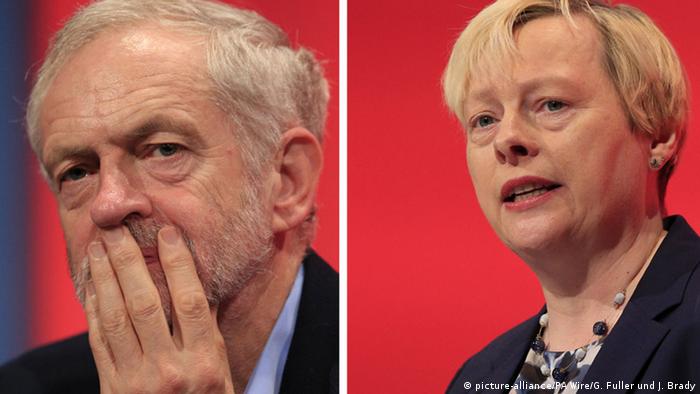 In the two weeks that have followed the UK's vote to leave the EU, political events have happened at a dizzying speed.

Change is certain to take place at the top of the ruling Conservative Party after Prime Minister David Cameron announced that he would be stepping down in September. Meanwhile, the opposition Labour Party looks set to enter the most divisive period of its history.

The battle pits Labour members of parliament, keen to depose leader Jeremy Corbyn, against party supporters across the country who feel quite differently.

Corbyn divides opinion sharply. His economic and anti-war stances have proved a hit -particularly with young leftists and "Old Labour" stalwarts who were never comfortable with the party under Tony Blair.


Others see Corbyn's political appeal as too narrow, fearing that Labour will never win power under his leadership.


It looks increasingly like a political battle to the death, with no room for compromise. Corbyn has vowed to stay, and his furious supporters want rebel lawmakers to be deselected - barred from standing as Labour candidates at the next election.


Perhaps that's why, until now, no challengers have formally thrown their hats into the ring. However, former party business and trade policy chief Angela Eagle confirmed on Sunday that she was ready to mount a challenge.

Though the government has ruled out any prospect of a general election before one is scheduled in 2020, Eagle and her supporters appear convinced that one is likely.

"There could easily be a very quick general election, and I believe I'm the right person to lead the party into that general election," Eagle told the British broadcaster ITV on Sunday. "This is a battle for a healed and a united Labour Party and a strong opposition to make our democracy work." 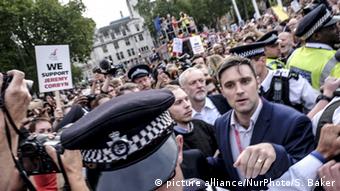 In a nonbinding secret ballot last month, 172 of 230 Labour MPs said they had no confidence in Corbyn's leadership; just 40 voted to support him. Deputy party leader Tom Watson failed to persuade Corbyn to stand down in the wake of the vote.

"I don't think he's been able to communicate with the electorate," Eagle said. "He cannot continue in the job, because he's lost the confidence of the Parliamentary Labour Party and he's hiding behind a closed door, denying that this is a fact. That's not leadership."

Though Eagle - only the second member of the UK parliament to be openly lesbian - appears ready for a leadership vote, there's just one problem: Corbyn enjoys the overwhelming support of party members outside parliament.

The softly spoken 55-year-old Eagle, whose voice cracked with emotion as she resigned from the opposition cabinet, faces tough questions over her voting record - in particular having voted for the Iraq War.

That issue is particularly sensitive in a week when the Chilcot report found that the UK government had gone to war too soon, without exhausting other options to address the issue of weapons of mass destruction.


One way to depose Corbyn would be to have his name omitted from any ballot paper. Eagle has been careful not to directly press for such a move but, given a vague wording in the party rules, it's a distinct possibility.

The party's national executive committee must decide on whether Corbyn would need to be nominated by 20 percent of Labour lawmakers, including those in the European Parliament. Soundings suggest that he would find it hard to garner that sort of support among members of parliament.

Observers such as the Guardian's Owen Jones say a contest that sidelines Corbyn would be unfair given the resounding mandate that he was given in the last leadership election in September, when he won 59.5 percent of the vote.


On Sunday, Corbyn said he fully expected to be on the ballot and added that he would take legal action should his name be omitted.

"I would ask her to think for a moment," he said. "This is the opportunity of the party to unite against what the Tories are doing - to put forward an agenda which is different from the austerity agenda being put forward by the Tories, and actually gaining a lot of ground."

It's not all bad for the Labour leader, with some 60,000 new supporters joining the party in less than a week. Polls show that most have done so to support Corbyn. And the 67-year-old, who pointedly said he was enjoying the leadership crisis, has earned plaudits for his defiance.


One tweeter equated the plotters to Italian politician Niccolo Machiavelli.


Others say the plot is anything but Machiavellian and, indeed, is likely to fail. The attempt to oust Corbyn was ridiculed as a #headlesschickencoup by some on social media.


Meanwhile, Prime Minister Cameron has tabled a vote on the renewal of the Trident nuclear weapons system before he steps down - reawakening a long-standing dispute within Labour. Many have interpreted the move as an effort to further divide an opposition already on the brink of all-out war.

UK MPs could debate a motion accusing former PM Tony Blair of misleading the House of Commons. The motion is for holding parliament in contempt over the 2003 invasion of Iraq. (10.07.2016)

As the post-EU referendum turmoil continues to unfold in the UK, divisions over the leadership of the Labour Party continue to deepen. A formal split of the party could still be in the pipeline if the deadlock remains. (05.07.2016)

The UK's Iraq inquiry took longer than the war