An Airbus A380 has been quarantined on landing at JFK amid reports of several passengers on board exhibiting high temperatures. Disease control personnel were called to attend to the flight from Dubai. 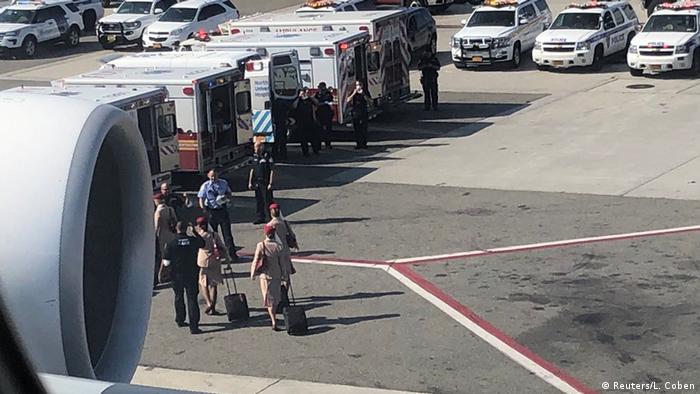 The office of New York City Mayor Bill de Blasio on Wednesday said a passenger plane had been quarantined amid reports that a large number of passengers on board were ill.

Footage showed the plane, surrounded by emergency vehicles, sitting on the tarmac.

Officials from the US Centers for Disease Control (CDC) were said to be at the scene, with the sick passengers believed to be exhibiting fever-like symptoms. The plane, an Emirates double-decker Airbus A380 traveling from Dubai, had landed shortly after 9 a.m. local time (1310 GMT), according to the airline.

Eric Phillips, a spokesman for Mayor Bill de Blasio, tweeted that the flight had stopped in Mecca, which was currently in the grip of a flu outbreak. He said "early indications point to that as a possibility."

Emirates said that 10 passengers had been taken ill and were being looked after by local health officials "as a precaution."

New York media outlets had initially put the number of ill passengers at about 100.

Passenger Larry Coben tweeted pictures of cabin crew and emergency responders leaving the aircraft. Coben said those on board had been asked to fill out a disease control and prevention form.

After disembarking, Coben said, passengers had their temperatures taken.

Soon after, Coben tweeted that he and others had been allowed through customs.