Pilot projects aim to light up rural Cambodia | News and current affairs from Germany and around the world | DW | 11.01.2011

Electricity in Cambodia is costly, and large swathes of the country are off-grid. Alternative energy sources are increasingly available – and in the long-term, they could even help boost the economy. 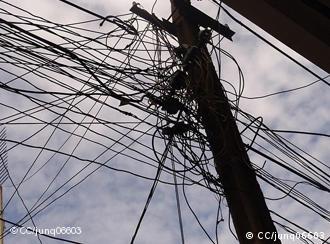 Electricity in Cambodia is in short supply

"Many regions in the north and southwest of Cambodia have no access to the electricity grid," said Peter Bolster from the GIZ international cooperation for sustainable development.

Only the capital Phnom Penh and a few tourist areas have a reliable electricity supply, and it is extremely expensive, Bolster explains. Indeed, the cost of electricity in Cambodia "is one of the highest in the world" because it is diesel-generated and needs to be imported from abroad at world-market prices, he said. 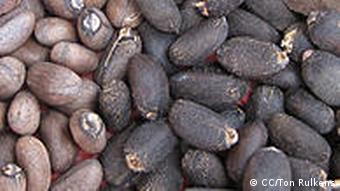 That's why some regions are looking into other options, such as green fuel. Ideally, this could at least partially replace costly diesel fuel. Current research is focused on jatropha, a hearty plant whose seeds contain oil that could be used to make fuel. The promising biodiesel candiate is easily grown even in land that is far from fertile.

In one pilot project underway in Cambodia, the oil from jatropha seeds is currently used for making fuel to power generators in some 380 households. Further initiatives are focusing on other alternative energies, but according to Bolster from the GIV, many innovative technologies are too expensive for domestic use.

The future is hydroelectric 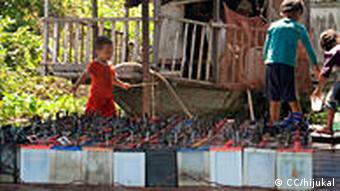 Much of Cambodia is off-grid

For now, the Cambodian government is pinning its hopes on hydro power. Construction began in 2010 on several hydroelectric dam projects planned to reduce electricity shortages in Cambodia.

Another planned hydropower plant on the Mekong River – the biggest river in Southeast Asia - has the potential to massively boost the country's power supply. But the project first needs to be approved by all the countries abutting the river, such as China, Vietnam and Thailand.

"Too many countries have a say (in the project)," he believes. "Finding agreement will take time."

Cambodia is one of the poorest nations in South East Asia

But the current high prices of electricity in Cambodia as well as its inadequate infrastructure are taking an immediate toll on the economy. Many companies prefer to invest in neighboring Vietnam, where energy, and therefore production, is significantly cheaper.

According to Volker Karl from the German KfW bank, Cambodia's energy problems will only be solved with the help of government investment. Economically, the only way to make smaller plants viable would be to incorporate them into the national grid, thereby helping contribute to energy storage schemes and cover energy gaps. But the government lacks the necessary funds to extend the national grid.

Private companies, meanwhile, have little incentive to invest in infrastructure. The population's low average income makes it impossible for investors to expect any yield from selling electricity.

Most Cambodians can't afford electricity, stresses Peter Bolster. "The majority live off one dollar a day,” he said. Spending any of it on electricity is out of the question.

As plans to build hydropower dams on the Mekong River gather pace, there are warnings that their construction could damage fish stocks, on which millions of Cambodia’s most vulnerable people rely for protein. (09.12.2010)

India's economy is growing quickly - and along with it, the energy demands of the country. But what happens when India's own energy sources can no longer keep up with this demand? Then it's time to conserve. (24.11.2009)