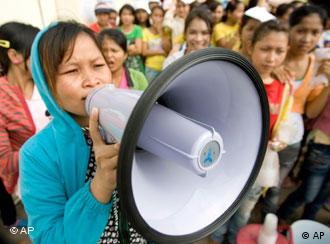 More than 10,000 female workers in Cambodia are protesting against the low wages they receive for the hard work they put in everyday. Needless to say, working hours are extremely harsh. According to workers' unions, more than 60,000 female workers have refused to work and manufacturing in nearly 40 factories has come to a standstill. The Cambodian Newspaper, Phnom Penh Post has reported that 50,000 workers have been prevented by their employers from taking part in the protests. 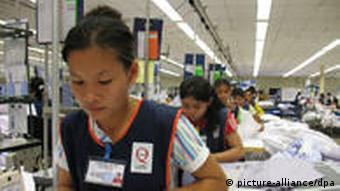 A textile factory in Cambodia

Making clothes for the whole world

Factories in Cambodia manufacture sports goods, shoes and clothes for big international brands including German ones like Adidas and Puma. The workers are protesting against an agreement between the Cambodian government and the industry, according to which the minimum wages for a factory worker have been fixed at US $61 a month. The unions are demanding a minimum salary of US $93. Hang Sarith, a 24 year old seamstress says, that with rising prices, she cannot support her family on the money she gets now. "Workers like us want a raise of $20 a month. They raised our salaries by just $5. But we need atleast 10 dollars more to survive. Everything has become so expensive."

Female workers in textile factories have been protesting for a long time. Last month, there were severe clashes between factory workers and policemen. The protests came to an end only after the workers leading the protests were dismissed from their jobs. Chea Mony, the head of the trade union says: "The police came and put an end to the protests. This is against the law. Factory workers have a right to participate in strikes and protests. They simply came and began hitting us. You can see that in Cambodia law and rules do not have any meaning." 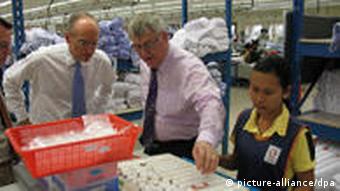 30 year old Check Phary says, the government obviously does not have any idea of how factory workers are suffering: "The government should try and see the situation under which we work and live. We are in a really bad state because we hardly earn anything. We cannot live off the money we get."

More than 30 percent of Cambodia's 14 million-strong population live below the poverty line. Nearly 350,000 men and women are employed in textile factories - one of the key industries driving the economy. Employers believe that the industry could face grave losses in the wake of these strikes. Other than Cambodia, workers in many Asian countries including China and Bangladesh have been protesting against deteriorating working conditions and low wages in factories which manufacture goods for western countries.