Ahead of the opening of Berlin's German Historical Museum (Deutsches Historisches Museum, or DHM) back in 1991, Stefan Moses, already renowned as one of Germany's most famous portrait photographers since the 1960s, was commissioned to produces a series called "The East Germans."

Moses spent months traveling around the former GDR, getting to know the people whose lives had been most directly affected by the fall of the Berlin Wall in 1989. Placing factory workers, fish packers, mechanics, police officers, but also artists, pastors and writers in front of a grey felt cloth, he portrayed the faces of "the other Germany." It became one of the most important series of his oeuvre.

Now, in a exhibition titled "Exotic Country: Photo Reportages by Stefan Moses," the same museum revisits the work of the photographer who died a year ago on February 3, 2018.

Stefan Moses was born on August 29, 1928, in Liegnitz, Silesia (today the Polish city of Legnica). Having two Jewish grandparents, he was labeled by the Nazis as "first-degree mixed race." In 1943, he was therefore banned from school and worked as an apprentice for photographer Grete Bodlée in Breslau until he was imprisoned in a concentration camp in 1944, which he survived by escaping.

After the end of World War II, Moses continued his apprenticeship and became a theater photographer in Weimar, which is also where he photographed Nobel Prize laureate Thomas Mann, a guest there on the occasion of Goethe's 200th birthday in 1949.

In 1950, Moses moved to Munich, where he worked as a photojournalist. He lived there until his death.

A master of nuance

Working in the tradition of pioneering German portrait photographer August Sander  (1876-1964), creator of the famous "People of the 20th Century" series, Moses nevertheless developed his own style. His respectful and nuanced portraits, usually in black-and-white, are legendary.

The young photographer was a chronicler of his times, documenting through different series in the 1950s and 60s the snobbish nouveau riche of the West German Wirtschaftswunder, big city poverty or the seclusion of former German emigrants who had left Nazi Germany between 1933 and 1945.

His photos appeared in popular magazines such as the weekly Stern, and contributed to changing Germans' perception of society. Today, his works are contemporary historical documents. 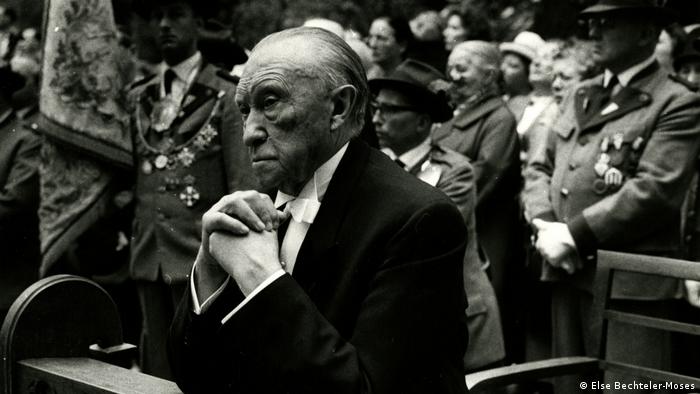 First chancellor of the Federal Republic of Germany: Konrad Adenauer in 1962

"Taking photos is remembrance work," Moses once said of his art. "Mine is to document people before they disappear."

The exhibition "The Exotic Country: Photo Reportages by Stefan Moses" is on show from February 1 through May 12, 2019 at the Deutsches Historiches Museum in Berlin.

Using herself as model, American photographer Cindy Sherman critiques our contemporary views of identity and the role of women in society. A look at the work of the 2019 Max Beckmann Prize winner as she turns 65. (18.01.2019)

Dense and compressed: Life in Hong Kong or Tokyo is challenging for its inhabitants. German photographer Michael Wolf has explored their reality through his award-winning works, now on show in Hamburg. (21.01.2019)

His portraits of societal subcultures made him one of Germany's most famous photographers in the 1960s. A new Stefan Moses retrospective showcases images from the photo series' that chronicled postwar Germany. (30.01.2019)