Philippines′ war on drugs affecting fight against HIV | Asia | An in-depth look at news from across the continent | DW | 19.09.2016

President Duterte has said that his government may need to extend its bloody anti-drug campaign for six more months. But the crackdown could be harming HIV interventions for injecting drug users. Ana P. Santos reports. 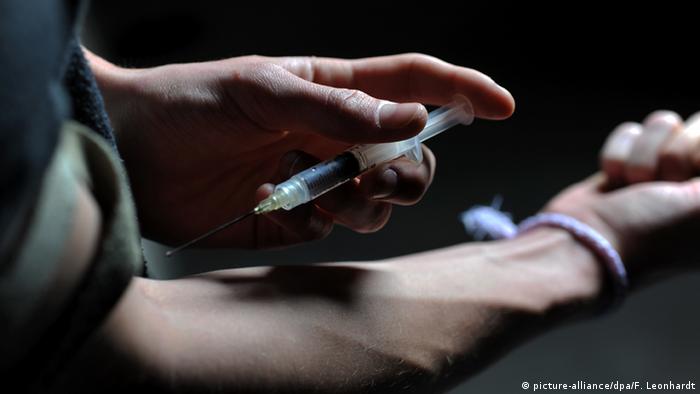 "My group of recovery friends is growing," said Renan Tumlos, a burly chunk of a man with a smile as big as his almost six-feet frame.

For the past nine years, Tumlos, 44, has been facilitating a support group of recovering drug users who meet every Friday for a Narcotics Anonymous meeting. Usually, there are 15-20 people who gather, but the surge of drug users seeking support and counseling has prompted local health authorities and advocates to tap Tumlos to help develop drug rehabilitation programs to cope with the demand.

Police records show that over the past several months since President Rodrigo Duterte's administration launched its war on drugs, 661,737 drug users and 53,066 drug pushers have surrendered and more than 17,000 drug personalities have been arrested.

The crackdown on illegal drugs has highlighted the Philippines' unpreparedness in dealing with the aftermath of rounding up drug users and pushers. Currently, there are only 44 rehabilitation centers nationwide and even before the intensified police operations, prisons were already 380 percent overcapacity, with the most congested jails reaching levels of more than 2,000 percent overcapacity. 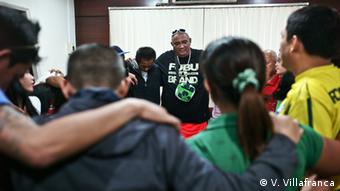 Cities like Cebu in central Philippines are playing catch up, putting together rehabilitation programs as quickly as they can to cope with the deluge.

Cebu's particular drug use problem has been linked to increasing HIV infections driven by the sharing of contaminated needles. In shanty towns, dealers' homes double as drug dens known as "shooting galleries," selling the opioid Nubain in small sachets. Users could bring their own needle or use the "service needle" - a house needle on rotation in the shooting gallery free for anyone to use.

Surveillance reports by the Philippine Department of Health (DOH) show that the typical shooting gallery has three to five service needles on rotation at a time, each of which can be used four to six times before it gets too blunt and can infect just as many people with HIV or hepatitis-C.

In 2014, the Cebu HIV/AIDS Registry reported that 74 percent of the city's 1,366 recorded HIV infections were due to needle-sharing. The DOH estimates that more than 50 percent of the roughly 6,000 intravenous-drug users in Cebu and its neighboring cities are positive for HIV.

HIV has been a growing problem in the Philippines which has seen the number of infections soar by 220 percent over the last five years. DOH statistics show that there are a total of 34,999 recorded HIV infections as of June.

Philippine President Rodrigo Duterte has said his country's drug problem was far worse than he anticipated when taking office. Around 3,500 suspected dealers and traffickers have been killed in the last 10 weeks. (18.09.2016)

An ex-Filipino death squad member has told parliament that President Rodrigo Duterte ordered the murder of hundreds of criminals and opponents in gangland-style attacks. One victim was allegedly fed alive to a crocodile. (15.09.2016)

Duterte tells cabinet he wants US special forces out, but he hasn't told Washington

The Philippine president has railed against Washington, saying the US planted seeds of instability a century ago. He said a US pacification campaign sparked a long-running Muslim insurgency in the south of his country. (12.09.2016)

Even before Duterte's war on drugs, existing laws made difficult to develop HIV prevention programs targeted towards users. The Dangerous Drugs Act criminalizes the possession and distribution of drug paraphernalia like syringes. As a result, Cebu's local public health organizations had to discontinue their needle-exchange programs in 2009; the city also passed an ordinance limiting the sales of needles and syringes without a prescription.

The following year, HIV cases among injecting drug users in Cebu jumped from less than one percent to 53 percent.

The Dangerous Drugs Board estimates that there are 1.3 million drug users nationwide.

When he assumed office, Duterte promised to eradicate drugs within 3-6 months, vowing to step down from office if he failed. But the president recently asked for a six-month extension of the violent war on drugs, saying that his country's drug problem was far worse than he anticipated when taking office.

Nevertheless, since the launch of the anti-drug campaign, it has been a race against time with intensified police operations that have seen more than 3,200 people killed in a combination of police operations and vigilante killings that police claim to be orchestrated by drug lords scrambling to erase their tracks.

'No one is hopeless'

Last May, the mayor of Cebu offered the police a reward of $1,000 for every drug dealer or criminal killed. The bounty has since been withdrawn.

"What we need are harm reduction strategies like needle exchange programs that have been proven to stop the spread of HIV," said Jerson See, president of Cebu Plus, an NGO that provides care and support for people living with HIV.

Senator Risa Hontiveros who heads the Senate Committee on Health has been calling for harm reduction strategies that will allow the creation of community-based drop-in centers and outreach services that will encourage the uptake of health services through improved peer education and support.

"Harm reduction is not only a compassionate response, it is also the most effective response," Hontiveros said.

Tumlos declined to comment on the administration's strategy but he hopes that other users who are coming forward can learn from his own recovery story. Ending substance abuse is difficult but it is not impossible. "I used drugs for 20 years. I did everything, marijuana, shabu, cough syrup - you name it. But now I haven't used them in 10 years. No one is hopeless."