Philippines: Duterte to run for vice president in 2022

Rodrigo Duterte is the ruling political party's vice-presidential nominee for next year's election. Critics say it's an attempt by the strongman to hold on to power after his presidential term ends. 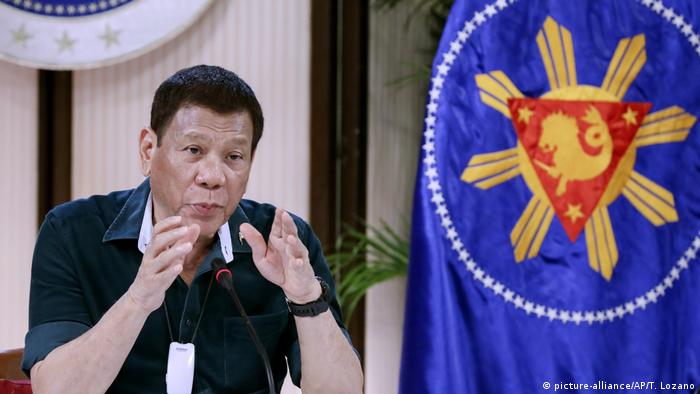 The announcement from the ruling PDP-Laban party lays the groundwork for the strongman to retain power after his six-year term ends in June 2022.

PDP-Laban is expected to endorse Christopher "Bong" Go as the party's presidential candidate. Go, Duterte's personal assistant and longtime aide, became a senator in 2019 thanks to the president's backing.

Go has worked with him since Duterte was a congressman representing Davao city in the late 1990s.

Karlo Nograles, executive vice president of PDP-Laban, said Duterte was making the "sacrifice" and heeding "the clamor of the people" by accepting the party's endorsement.

Nogales added that the move would "guarantee continuity of the administration's programs during the past five years," including those meant to tackle the"war on drugs."

Political observers say Duterte is using his vice-presidential run as a means to stay in power after his term as president ends.

They believe that he could be making a play for retaining power through the No. 2 post, by taking over as president if Go were to win and then resign.

Temario Rivera, head of the Center for People Empowerment in Governance, a public policy body, said in July that such a power grab would shield Duterte from possible legal action when he leaves office.

Duterte's daughter outshone Go during opinion polls that sought to identify possible presidential contenders. Sara Duterte-Carpio is currently the mayor of Davao city. But both Sara and her father are against the idea of her running for presidency.

Duterte is currently under the spotlight for waging a brutal campaign against illegal drugs. The crackdown allegedly resulted in thousands of deaths with "near impunity," according to a UN report released last year.

He faces a possible investigation by the International Criminal Court for crimes against humanity. Duterte also faces intense public criticism as the country rides out a severe outbreak of the delta strain of the coronavirus.

Philippines has recorded a total of 1.86 million COVID cases, a fifth of which were detected over the last 40 days.

Nearly 32,000 people in the Philippines have died so far, according to official data.