Accomarca was the scene of the worst massacre during Peru's 20-year Shining Path insurgency. The late Maoist cult leader Abimael Guzman believed the blood of peasants ought to irrigate his violent revolution. 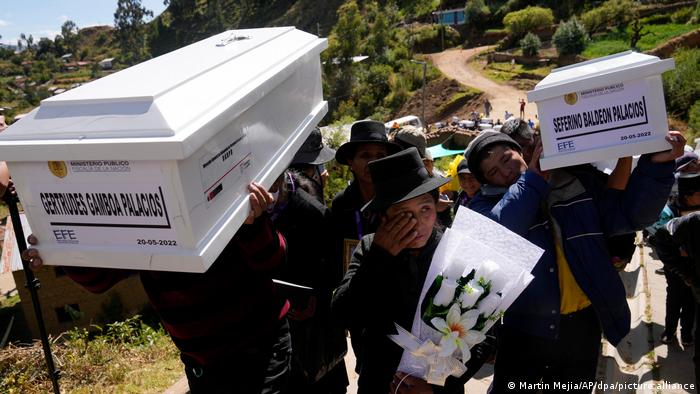 Families of some of the victims of a 1985 massacre carried out by soldiers hunting Shining Path guerillas in the town of Accomarca buried their loved ones' remains on Friday.

Sixty-nine of those buried Friday were killed by soldiers in the mountainous town in the south of the country on August 14, 1985.

The Accomarca massacre is the worst such known violence during Peru's 20-year-long Shining Path insurgency, which lasted from 1980 until 2000.

Accomarca is a village in southern Peru of 500 where the majority speak Quechua as their mother tongue.

The late leader of the Shining Path, Abimael Guzman, died last year. In life, he believed the blood of peasants would irrigate his violent neo-Maoist revolution.

The group's guerillas killed local officials, forced farmers to provide for its fighters and generally unleashed abusive, violent mayhem in the name of an elusive revolution.

Almost 70,000 people were killed in the violence he unleashed and the state's bloody response to it.  An additional 21,000 remain missing while a truth commission established in 2004 has said there are 4,000 mass graves.

During the insurgency, the army reacted brutally at times by accusing farmers of being part of the Shining Path, killing some and labeling many "terrorists."

To try and stem the violence, reactionary revenge attacks occurred, driving many in poor and remote communities into the hands of the very Shining Path guerillas the government was fighting. Accomarca was relatively near to the Shining Path's Andean stronghold of Ayacucho.

Under the command of Telmo Hurtado, soldiers opened fire on homes in Accomarca on August 14, 1985, killing 69 people and committing acts of sexual violence before corralling people into three homes which they then proceeded to dynamite.

Hurtado has since been convicted of the massacre after being extradited following a more than decade-long retirement in Miami. He is serving a 23-year sentence and has been given the moniker "the butcher of the Andes" in the Peruvian media.

Eighty caskets were buried Friday in a graveyard at the site of a former military base. Investigations revealed the base was used to torture locals who the military accused of being Shining Path guerillas.

Victims' families participated in the procession while holding flowers as well as photographs of their late loved ones to cries of "Justice!"

Only 37 of the 80 caskets had human remains. The rest have clothing or other objects identified by family as belonging to their loved ones.

What do the survivors say?

Teofilia Ochoa told the AFP news agency that she was 11 years old that day and was saved by running into a field.

"I lost my mother and my five brothers," Ochoa said.

Justa Chuchon, 48, told the Associated Press she was only 10 years old the first time she thought she might be killed during a raid carried out by soldiers who accused her family of being part of Shining Path.

She said that along with her brothers she was ordered to pick up and bury the bodies of 11 people. A month before the massacre, in July 1985, she said she was raped along with a cousin by soldiers.

"Finally, our friends and neighbors will find rest," she said.