PEGIDA Poland: ′Muslims are not part of our culture′ | Europe| News and current affairs from around the continent | DW | 07.02.2016

PEGIDA Poland: 'Muslims are not part of our culture'

Wroclaw was set to become the second Polish venue of PEGIDA's Europe-wide day of action, but the demonstration was canceled because PEGIDA is apparently too German for Polish nationalists. 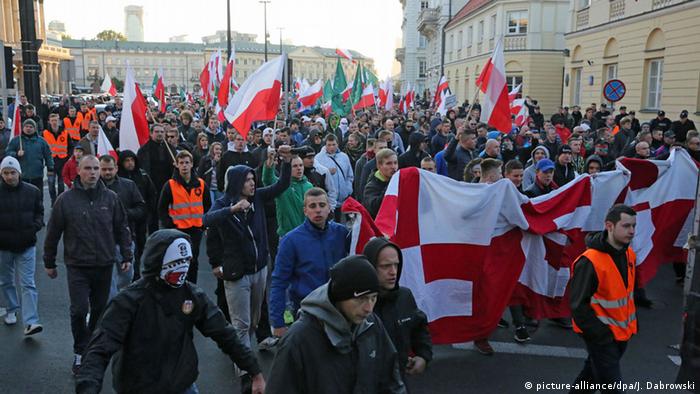 The "National Movement" demonstrated against immigration in Warsaw last October

Various European PEGIDA (Patriotic Europeans against the Islamization of the West) chapters had originally planned to hold a Europe-wide demonstration known as "Fortress Europe" in 14 European cities on Saturday. But in Wroclaw, Polish organizers canceled the event just one day in advance.

Reasons for the last-minute cancelation were vague. According to Alicja, a member of PEGIDA Polska, the "Radical Nationalist Camp" (Oboz Narodowo-Radykalny, or ONR), a group that was to take part, had threatened to sabotage the PEGIDA part of the demonstration.

Alicja explains the power struggle: The ONR felt the activists with PEGIDA Polska were unacceptable because, although they are Poles, most live in Germany. However, Robert Winnicki, leader of Poland's far-right Ruch Narodowy group, didn't seem to be quite so narrow-minded: PEGIDA frontwoman Tatjana Festerling was invited to take part in Saturday's rally in Warsaw.

After comments from Russia's foreign minister, Berlin has asked Russia not to politicize a Russian-German teen's potential rape. The girl told lawyers she was abducted and raped by migrants two weeks ago. (27.01.2016)

The Rhineland region is gearing up for the culmination of Carnival, also known as the "fifth season." Parade floats, comedians and sketches poke fun at everything - the mass arrival of refugees is no exception. (26.01.2016)

Alicja was disappointed about the resistance from the right-wing extremists. She still wants to fight against illegal immigration, but does not question the fact that people in need deserve help.

"But the uncontrolled immigration that has been taking place in Germany for a while now would pose a threat to the security of any country," she told DW.

Alicja is herself an immigrant, and says that integration can only work if newcomers learn the language and respect the traditions and culture of their new country. "Many do not want to do this. Muslims try to impose their world view on others. This tests many people's limits of tolerance," she said.

While bishops and official church organizations in the mostly Catholic nation advocate helping people in need - regardless of their legal status - even religious Poles have rejected this view.

According to a survey conducted in January by the Polish research institute CBOS, 53 percent of respondents believe that Poland should not accept any refugees. Forty-one percent were in favor of temporarily accommodating refugees and 4 percent were for permanent residency. A similar survey about a month earlier showed the same results, seeming to indicate that the debate sparked in Germany after the New Year's Eve assaults in Cologne did not seem to influence public opinion in Poland in any major way. 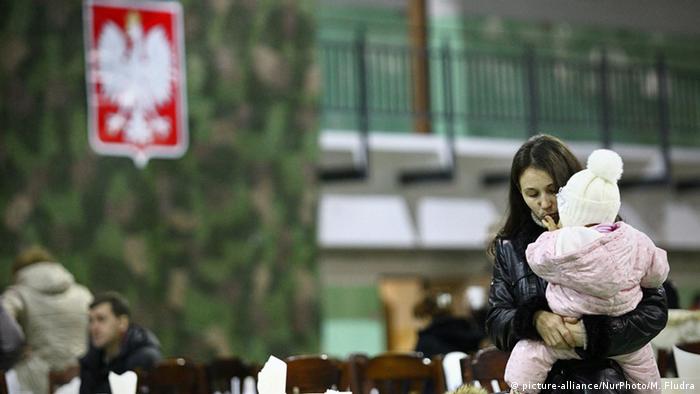 According to CBOS, Poles mainly reject Muslims. They are generally against accepting refugees from the Middle East and Africa but the survey showed that 61 percent of Poles were in favor of helping Ukrainians fleeing from the conflict in their country.

PEGIDA Polska is currently experiencing a surge in popularity. Until now, the movement has mainly gained momentum in social media. The organization's Facebook page was founded in January 2015, immediately after the "Charlie Hebdo" attacks in Paris. Since then, more than 17,000 people have "liked" the page.

Illegal immigration not even an issue

As in Germany, PEGIDA sympathizers have rebuffed all accusations of fascism. And Alicja dismisses any accusations of racism, claiming that all hate comments are blocked in the PEGIDA Polska forum. But she doesn't seem to have a problem with a general rejection of Muslims. Furthermore, the lines between PEGIDA Polska and other right-wing nationalist groups are blurred.

"In light of the problems in Europe, all kinds of organizations benefit from the different social moods," said migration expert Miroslaw Bieniecki, of the Polish think tank FISM. Even PEGIDA Polska's calls "against illegal immigration" are totally out of place in Poland, said Bieniecki, as illegal immigration does not play a role in Poland. Poland simply does not appeal to refugees. If anything, Ukrainians have entered the country illegally, but hardly anyone has noticed.

According to the last census taken in 2011, 99.9 percent of the Poles who belong to a religion are Christians. Only 5,000 people stated that they were faithful Muslims. "PEGIDA Polska therefore protests against Muslims who are almost non-existent in Poland and Muslims who are not coming to Poland," concluded Bieniecki.